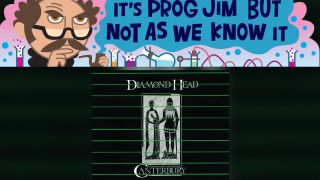 Often derided as a huge error from one of the NWOBHM cult heroes, in fact this was the album that showed Diamond Head were a cut above their peers.

When the band first made their impact at the start of the 80s, they were hailed by some as the natural successors to Led Zeppelin. A bold, brave claim they somewhat justified on both the classic Lightning To The Nations and Living On… Borrowed Time albums. But with Canterbury, the band threw over everything they’d achieved and went for a far more exhaustive and progressive approach. After previously establishing a heavy rock perception that was both powerful yet thoughtful, vocalist Sean Harris and guitarist Brian Tatler – the band’s visionaries – shook everything up by introducing more complex and challenging ideas into the music. It made the album a little too diffuse and provoking for many diehards, who wanted more of the same values they’d loved on the prior releases. However, this didn’t appeal to two talents who refused to stand still, take root and stagnate. The change in attitude is obvious on opening track Makin’ Music. Yes, it’s heavy and melodic, but the arrangement owes something to Jethro Tull – it is a little more supple than people were expecting. The agitation to stand apart from the masses becomes even clearer on the portentous The Kingmaker, with its thrusting eastern soundscape, and on the title track, which has an evocatively sensitive piano underbelly. But arguably the crowning glory here is Ishmael. Blessed with a mysterious, epic atmosphere, it lasts a shade over four minutes, but has a confident stride that fitted in a lot more with the burgeoning neo prog scene a the time, rather than with anything going on in the metal world. Canterbury is an affluent album, rich in musical detail and certainly has a level of accomplishment that is so demanding the band actually replaced their rhythm section while the album was being recorded. When it was released, this confused a lot of people. It was criticised for being too different to what people had come to expect from Diamond Head. But, more than 30 years after it first appeared, Canterbury can finally be revealed for what it is: a quality progressive excursion that took the band into uncharted realms and heralded the start of an artistic journey that was never taken further. Canterbury is an opulently progressive triumph.