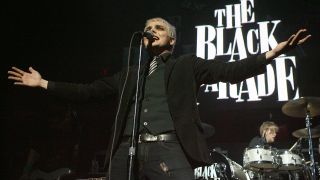 Gerard Way is not only a musical icon, but also a subcultural leader. The New Jersey-born self-professed comic nerd gave not just music but ideology to a generation of goth/punk/emo kids who ached for affirmation.

Gerard and My Chemical Romance rose meteorically from the underground in 2005 when their Three Cheers For Sweet Revenge album catapulted them up the charts and into larger and larger venues on both sides of the Atlantic. But it wasn’t just the apocalyptic pop-punk anthems that appealed to the nations’ teenagers – it was the band’s frontman.

Born in 1977, Gerard was a social outcast who gravitated, as many of us did, towards the pursuits of misfits: underground music and graphic novels. The latter occupied his ambition and it was only after the nearby events of 9/11 that he decided to start a band.

Gerard’s onstage persona was honest, which resonated with the youth who wanted veracity, not just pantomime. Gerard spoke directly to a disenfranchised generation in an internet age, ever-obsessed with materialism and looks. He famously once said on stage: “Hey, girls, you’re beautiful. Don’t look at those stupid magazines with stick-like models. Eat healthy and exercise. You are gorgeous, whether you’re a size four or 14. It doesn’t matter what you look like on the outside, as long as you’re a good person, as long as you respect others.”

As news of this and other stage rants proliferated, he gained no friends from the more red-blooded end of the rock and metal spectrum. But he also offered positivity in dark times, invariably making anti-suicide speeches from stage, such as at Reading in 2004, when he said: “Suicide is a serious thing. And if you know anyone who is suicidal, you need to get them help. No one should be in pain.”

It struck chords among fans like no nu-metal rap-chat or hardcore claptrap ever had.

Of course, with their notoriety and ‘emo’ image, they picked up no small amount of haters, along with the archetypal cred thieves, taking underground music and packaging it for the teen market. Gerard found his band hated in the hardcore and metal underground, and they were still far from being household names.

However, the frontman had other problems. As MCR’s popularity skyrocketed during Three Cheers, his drug and alcohol addiction had already reached an unworkable level and he decided to get clean. With the odd recreational drink not suiting him, he decided to abstain completely. He was clean, sure, but he’d still ‘been there, man’; he understood the meaning of ‘lowest ebb’.

Many artists find they lose their muse when they get clean, but MCR would suffer no such fate thanks to the classic crossover album they were about to unleash. When they released The Black Parade in 2006, My Chemical Romance became an arena band and, turning their back on any semblance of their hardcore roots, they embraced a whole new audience, as well as a ‘Green Day meets Pink Floyd’ sound.

With that album came a new look, fed by Gerard’s fertile imagination and all part of his driving creativity. Copying someone so individual is hard because the plagiarism is so clear, but the power of Gerard’s image and personality was too strong and dozens of copycats were soon spawned.

The backlash was inevitably brutal but, as ever, Gerard was there for his fans. “You’re going to come across a lot of shitty bands, and a lot of shitty people,” he noted. “And if any one of those people call you names because of what you look like or they don’t accept you for who you are, I want you to look right at that motherfucker, stick up your middle finger, and scream ‘Fuck you!’”

Never turning his back on his most vulnerable fans, he continued to represent the underdog and give them the courage and tools to stick to their guns.

Now in his 30s, the once nerdy teen and troubled 20-something had it all: a beautiful wife (in Lyn-Z of Mindless Self Indulgence), and a child with a standard silly rock-star-kid name (Bandit Lee Way).

It’s always hard to say how big a band could get without a particular frontman, be it HIM, Judas Priest or Limp Bizkit, but one thing is clear when it comes to MCR: there’s something about Gerard Way that, love him or hate him, came to mean to a generation what the likes of David Bowie and Marilyn Manson meant to their fans; the type of role model the mainstream would simply never give them.

My Chemical Romance head out on tour later this year. Find full dates below: