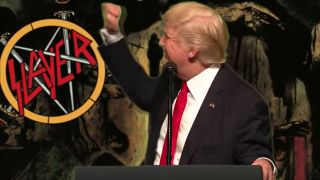 Donald Trump just loves a bit of metal, doesn't he? In October we saw him crooning along to Chop Suey by System Of A Down and now he's barking out Slayer's Raining Blood at the top of his lungs.

Okay, that's not strictly true. It's actually all the work of YouTuber Lars Von Retriever who has synced up Trump's speeches to Tom Araya's screams of bloodlust. There's even a little dance from Donald while holding the Reign In Blood album cover (thanks to some rather clever editing).

Two years ago, Slayer's Kerry King called Trump “the biggest biggest liar I’ve ever seen in politics,” so we're not sure how Slayer's camp will react to this edit.