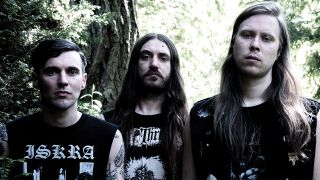 Voltairine de Cleyre was a 19th century American anarchist writer and influential early feminist whose short, impactful life burned with revolutionary fervour. Though she only made it to the age of 46, her vision of anarchism has lived on, and made its mark in sometimes unexpected ways. Unbeknownst to de Cleyre, she would serve as a major inspiration to one of the most important political black metal bands of the 21st century: Dawn Ray’d.

The Liverpudlian trio takes its name from de Cleyre’s 1898 poem Santa Agueda, which chronicles the 1897 death of the Premier of Spain; he was assassinated by an Italian anarchist who sought retribution for atrocities committed by the Spanish government against anarchists and other radicals earlier that year.

‘Across his path the steel- nerved slayer waits / “And both shall burn together,” – one in light / Of unconsuming hell and reddened night; / And one with feet on hell and brow dawn ray’d, pure white,’ de Cleyre wrote.

Whether she knew that the town of Santa Agueda itself was named after the Catholic patron saint of sexual assault survivors is unknown, but it’s a detail that  was surely not lost on a band whose musical endeavours hinge upon a social justice framework.

When Metal Hammer touches base with Simon Barr, the band’s vocalist, violinist, and primary lyricist, he’s at home up North, taking a break from the hectic promotion schedule for the band’s upcoming album, Behold Sedition Plainsong.

For the Dawn Ray’d boys, free time is as rare as hen’s teeth these days, though he and guitarist Fabian Devlin have recently taken up surfing (despite a nasty cycling accident last year, drummer Matthew Broadley still prefers his bike to a board). A revolutionary’s work is never done, but it’s nice to see them taking time  to enjoy roses as well as bread.

Simon and Fabian met back in 2008 and quickly started a screamo band, We Came Out Like Tigers, with whom they pumped out five releases in six years. They also toured with Black Mass, Matthew’s band, and, after asking him to fill in on a few tours, the skeleton of Dawn Ray’d was formed. In 2015, the band released a vicious debut EP, A Thorn, A Blight, and made it apparent that their screamo days were over.

“It felt like a natural progression [from screamo to black metal]; we were already screaming, and playing tremolo guitar and blastbeats, and by the time We Came Out Like Tigers ended we were almost exclusively listening to black metal,” Simon explains.

“The thing I am always looking for in music is imagination and emotion, and black metal is where I find the most of that at the moment. I love the escapism and ethereal nature of black metal – it gets me through the boredom and drudgery that capitalism brings.”

Dawn Ray’d’s stance as militant antifascist, anti-capitalist anarchists has always been intrinsic to their very existence, and they’ve never been shy about sharing their political affiliations.

As Simon says, “We started from the first day as a political band,” and they played countless gigs at anarchist squats and DIY punk spaces around Europe where metal bands aren’t always assured of a warm welcome. Luckily, Dawn Ray’d’s ultra-political reputation preceded them, and they were made to feel right at home.

“One show in Germany, I walked off the stage and instantly someone wanted to know exactly what our name meant, what the lyrics were about, where the logo came from!” Simon recalls.

“[But] people literally risk their lives to build and defend squats and autonomous centres, so I have full support for what people have to do to defend them… Those places are where the flame of music burns the brightest.

"People have been unbelievably supportive of us, and I think they appreciate us talking about anarchism and anti-fascism outside of just d-beat or punk shows. These ideas aren’t new to heavy metal; to think they are is a revisionist view  of history.”

Their latest album makes it even more clear which side they’re on in the current global struggle against capitalism and white supremacist fascism. Behold Sedition Plainsong is the trio’s second LP for Prosthetic Records, and carries on the mission that their explosive debut, The Unlawful Assembly, embarked upon in 2017.

Their masterful blend of plaintive folk and atmospheric, melodic, yet eminently aggressive black metal dances on a knife’s edge, sending up signal flares for the coming class war. As Simon proclaims on the opening track, Raise The Flails, in his throttled rasp, ‘It’s time for new tales of resistance!’

Their politics are just as revolutionary as their dynamic spin on ice-cold black metal. Anarchism is a complex radical leftist political ideology with a variety of branches, such as green anarchism, queer anarchism, Black anarchism, and many other permutations.

Iconic anarchist author and activist Emma Goldman summed up its core tenets: “Anarchism stands for a social order based on the free grouping of individuals for the purpose of producing real social wealth; an order that will guarantee to every human being free access to the earth and full enjoyment of the necessities of life, according to individual desires, tastes, and inclinations.”

In short, anarchism is non-hierarchical, anti-authoritarian, and in opposition to all forms of oppression, including the state, the police, and the prison industrial complex, and advocates for a stateless society organised around voluntary cooperation and free association. “Anarchy” is not a stand-in for “chaos”; it is a vision of a better world.

“For me, anarchism is the freedom to live your life any way you choose, as long as in doing so you don’t affect anyone else’s ability to do the same,” Simon explains.

With that in mind, one could argue that the very nature of black metal is anarchic at the root. Its fierce disregard for hierarchy and social norms, its rampant creativity, its individualistic streak, and its dreamy propensity for envisioning different (if not necessarily kinder) worlds all fit neatly into the anarchist worldview.

Yet the genre remains plagued with reactionaries, those who neither endorse nor condemn anti-fascism, racist boneheads, and more than a few outright neo-Nazis. But as far as Simon is concerned, the music itself isn’t to blame; the fault falls at the feet of infiltrators who seek to use the metal scene as a recruitment ground.

“Fascists have always sought to infiltrate radical youth movements and cultural scenes; they tried it with Oi and punk, they have tried it in some sections of electronic music, but they always get disrupted and kicked out,” he explains.

“The same will happen in black metal. The far right are a vocal minority in this scene, so a big part of the struggle is being vocal and visible in opposition to those ideas, so as to lessen their influence, whilst actively working to disrupt their shows and networks. Let’s be clear – fascism is the most violent and horrific ideology we’ve seen so far, so we cannot compromise or hesitate in our attempts to stop it.”

With the spectre of various political crises looming – Brexit here, Trump in the US, the climate, white supremacist terrorism, and capitalism for all of us – Dawn Ray’d and everyone else with a political consciousness have quite a lot to chew on right now. In Simon’s estimation, what issue should be at the forefront of our minds today?

“Anti-capitalism has to be our main goal, all the things you mentioned are just symptoms of that one horrendous system,” he says. “For me, anti-fascism and environmental struggles will need to go hand-in-hand from here on out.

"Migration is going to be a huge issue in coming years as parts of the world become unliveable, so our job as radicals or just decent people is going to have to be helping people get to where they need to go and looking out for our fellow working class brothers and sisters.”

The fires have been lit, the signal flares have been sent screaming, and darkness is everywhere, so what is to be done? If Behold Sedition Plainsong is a call to action for a dying planet, what’s the game plan?

“Anything that [you] think will help solve or ease the problems around us, without waiting for the state or any other authority to come to our aid and do it for us,” Simon says firmly.

“We all have different but equally valuable skills, and we just have to look to see where they can be useful. We all prioritise different struggles that speak loudest to us; for some people it is land defence, some people liberate and protect animals, some people fight the border, some help feed those that are in need of food. There is so much to be done, and there is no one better to do it than you.”

5 Other anti-fascist metal bands you need to hear

As one of the original progenitors of post-black metal, Manchester’s Caïna have been on the scene since 2004 (and upsetting plenty of Nazi boneheads in the process with their outspoken leftist views). Ever-evolving, perpetually experimental, the project has returned to its pitch-black roots on new album Gentle Illness.

This Nottingham outfit have been flying the black flag since 2015. Their stated mission? To destroy NSBM. Their weapon? Wickedly melodic, eerily atmospheric black metal that chills to the core and cultivates an air of danger in its merciless battery.

On their self-released debut, The One Reborn, this San Diego, CA trio found a way to combine their antifascist politics, love for the videogame Bloodborne, and collective obsession with classic gory 90s death metal into a brutal, blood-splattered cocktail of working class fury.

Greece is a hotbed of anarchist militancy. Athens-based Yovel’s stridently melodic and relentlessly aggressive take on black metal is a rousing battle cry against the horrors of fascism and capitalism, and 2018’s Hɪðəˈtu is a masterwork.

Spectral Lore is another Athens export, and is the solo project of multi-instrumentalist Ayloss. Grandiose melodies and ambient interludes underpin its cosmic, starry-eyed black metal stylings, and transmit antifascist messages from beyond the stars.

Listen to: No Excuses for Fascist Sympathy (Book of Sand cover, single, 2019)