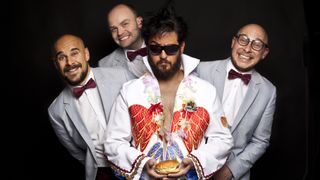 Elvana: hail to The King, baby

Elvana have dubbed themselves ‘The World’s Finest Elvis-Fronted Tribute To Nirvana’. There’s not much in the way of competition, but that’s beside the point – they rock.

Elvana’s Elvis turns out to be a massive Nirvana nut, so we put him to task: we got him to pick his 10 favourite tracks from Seattle’s finest that The King would’ve crooned out of the park.

“I love this song. It’s one of the hardest Nirvana tunes to learn and perform live. The intro, the way the vocals go along with the guitars and then the drums come in; there’s a real subtlety to it, the way it breaks into the chorus. It’s been really hard to learn but it’s great.”

“This is probably my favourite Nirvana video, too. It’s just a stunning video and there’s a fragility to the band in it; there’s something really nice about Kurt sitting there with the other two guys’ arms around him. We play Heart-Shaped Box and that always goes down a storm.”

“We do a cover of Breed that bridges into Viva Las Vegas, and people go absolutely mental for that. But I’m gonna say Breed mainly for Dave Grohl’s drum roll at the start of it. It’s so impressive and you just can’t mention Nirvana without mentioning the drums, can you?”

“I could waffle off a load but I don’t want to do any disservice to the other songs! But we’ll go with something quieter. We can have a cover, right? We’ll have Where Did You Sleep Last Night, because it’s just so raw and beautiful. Kurt Cobain’s vocal is so broken but it sounds so beautiful at the same time.”

“There’s something special about that Reading Festival performance in the Lithium video… but Lithium is just the tune, isn’t it? It’s that kinda pub rock chorus that everyone can sing along to, like even our parents and their parents can sing along to that chorus! It’s so simple and so effective.”

“From an Elvana point of view, School is a really fun one to play – we break it down into In The Ghetto by Elvis and that goes down really well. School’s just so raw and so angsty; for me, it really represents that raw edge of Nirvana.”

“It’s probably one of the poppiest Nirvana tunes out there. They used to open with Aneurysm – even though it was a B-side, it was an A-list piece. It just works really well with Elvis, too. So that’s my list – that’s Elvis’ list.”