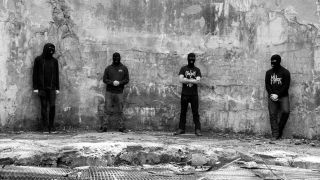 Mysterious extreme metallers Dragged Into Sunlight currently touring with black metal royalty Mayhem for what might be the nastiest double-bill of the year. Seriously, how are venues going to cope with the sheer volume of terror and evil oozing from the stage each night?

On the tour, Mayhem will be performing their landmark record De Mysteriis Dom Sathanas in full, an album widely-regarded as one of the best and most influential black metal records of all time. But what other extreme albums do you need to know about? We asked Dragged Into Sunlight to pick their five favourite black metal records, which you should listen to immediately.

Unless you’re scared, of course.

“30 minutes of non-stop, relentless, vomit-inducing, blackened war metal. One round with this album will have you feeling like you’ve taken a shot put to the temple.”

Darkthrone – A Blaze In The Northern Sky

“Darkthrone’s second album, and their first black metal release, from way back in 1992. Its raw and cold aura, combined with thrash riffs and d-beats, make for a must-have second-wave album.”

“Bleakness at its bleakest. Very few bands manage to convey such a sense of despair and emptiness as Austere do on their third and final album. Misery forever.”

“A record that continues to influence Dragged Into Sunlight’s sound to this day. An incredibly important release in black metal history, and proof that tone is as much in the hands of the player as the amp he uses.”

“This album raised the bar several notches in terms of thinking outside the limitations of black metal when it was released back in 2010. Dissonant, technical, atmospheric; Paracletus is nothing short of a modern black metal masterpiece.”

Dragged Into Sunlight heading out across Europe and the UK. All dates are with Mayhem unless otherwise stated.