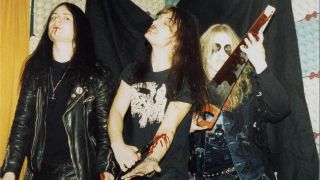 Though the black metal movement continues to expand at a remarkable rate – with fans and practitioners now found in almost every country imaginable – the ‘90s was unquestionably the most important and formative period for the genre thus far. The beginning of the decade saw a small collection of musicians consciously resurrecting the spirit of the first wave of black metal and from there it exploded in all directions, with numerous subgenres developing in the years that followed; folk black metal, war metal, industrial black metal… the list goes on. You could actually quite easily list 100 classics that were issued during this ten-year period, but we’ve narrowed it down to 20.

Blasphemy is about as close as black metal gets to death metal without becoming… well, death metal. Aptly enough, it was this album that helped give birth to the black/death hybrid genre ‘war metal’, and Fallen Angel Of Doom… still sits pretty much at the top of the pile in that field. It’s an extremely violent, primal and otherworldly slice of immersive extreme metal, played from the heart and with a black metal atmosphere drawn straight up from the depths.

Something of a bridge between the first and the second wave of black metal, Master’s Hammer were (and still are) an elusive and highly eccentric Czech act. Notably, full-length Ritual features a similar use of keyboards and epic riffs to many of the Norwegian bands that they would help inspire (including Hades and Enslaved) while also containing elements that remain quite incongruous even today.

Darkthrone – A Blaze In The Northern Sky (Peaceville Records, 1992)

A superb and extremely significant opus, A Blaze… signalled Darkthrone’s conversion from modern, technical death metal to ‘80s inspired black metal and was actually the first full-length Norwegian black metal album. In fact, Blaze contains quite a lot of death metal alongside the more Celtic Frost inspired material, and the combination of wall-to-wall riffs and unholy atmosphere still inspires fans and musicians today.

Samael formed in 1987 and their early releases arguably owe much more to the first wave sounds of bands like Hellhammer with a slower, dark, ritualistic feel defining the music. This, the second full-length, was a definite move toward more sophisticated territories but doesn’t sacrifice the band’s more primal roots. A moody, unflashy classic.

When it comes to Emperor, the debut full-length In The Nightside Eclipse is perhaps a more common choice in black metal ‘best of’ lists – and that album certainly is a masterpiece – but the four tracks released here a year earlier capture the band’s keyboard-augmented fury in a somewhat rawer and perhaps more vital fashion. It’s also a nice two-for-one, thanks to the inclusion of the frantic thrashy black metal of those other Norse legends, Enslaved. Surely black metal’s most iconic split album.

Finland’s Beherit initially came from the same chaotic and primitive school of black metal as the aforementioned Canadians, Blasphemy. With Drawing Down The Moon however, the band alternated such an approach with slower, more ritualistic and occult-drenched metal numbers, as well as several atmospheric electronic instrumentals. Some find it to be too basic for their tastes but those that take the time to ‘get’ it, will be under its spell forever.

Having released one of the first Norwegian black metal albums the previous year in the shape of Diabolical Fullmoon Mysticism, Immortal stripped down their icy assault with a collection of even more frantic and high-paced compositions that build strong, stirring songs from little more than lengthy, earnest riffs, rapid percussive bombardment and Abbath’s trademark vocals.

Impaled Nazarene’s punky, Motörhead-inspired music would eventually evolve out of black metal’s perimeters altogether, but not before this slice of pure madness was created. Primitive and stripped down to the point of being avant-garde, it is a gloriously one-dimensional masterpiece, an almost unrelenting musical blitzkrieg of simple, unforgettable riffs, machine gun drumming and sublimely vitriolic vocals.

Formed at the tail end of the ‘90s, Brazil’s Mystifier sound was a skilful combination of adrenaline-pumping South American aggression and a more creeping and ritualistic intention. In fact, with their heavy interests in Satanism and native macumba (Brazilian witchcraft/spiritualism), Mystifier’s two albums (of which this is the second) are some of the most eerie in the black metal back catalogue.

So much has been said about Mayhem’s debut full-length that it’s hard to know where to start when describing its quality and importance to the black metal genre. Mayhem were arguably the most important black metal band in terms of reigniting the black metal movement and this gloomy, impenetrable, aggressive and eccentric – not least in the vocal department – work perfectly embodies the dark, angry and otherworldly spirit of the genre.

Les Légions Noires – or ‘The Black Legions’ – were a small and fiercely underground circle in France that rarely released their recordings to the greater black metal ‘public’, instead distributing demos to close contacts only. This split album between two of its leading bands is a rare exception and combines the punky, jammed-out Bathory/Darkthrone-esque attack of Vlad Tepes and the utterly hateful and disturbing sounds of Belkètre.

While Sweden’s Dissection were very much black metal in terms of ideology and atmosphere, they also featured noticeable elements of the melodic death metal movement exploding in their home country, as well as classic ‘80s heavy metal. This, their second album, is a melodic, majestic and gloriously epic listen that features a measured, bombastic tone yet also makes use of furious, high-paced delivery when necessary.

Whatever one’s opinion of Varg, Burzum remains one of the most important names in black metal and certainly one of the most musically influential. All of the first four albums are essential and though the fourth, Filosofem, is perhaps the most acquired taste of those, it also touches upon the genuinely transcendental with its minimalist and yet strangely sophisticated compositions. Black metal as art, one might say.

Mysticum – In The Streams Of Inferno (Full Moon Productions, 1996)

Obsessed with sex, drugs, Satan and industrial themes, Mysticum offered a new vision of what black metal could be. They brought with them a more contemporary aesthetic – genuinely groundbreaking at a time when the genre was still defined by medieval imagery and historic themes – and a similarly revolutionary use of unrelenting electronic percussion, influenced by the members’ interest in hardcore techno.

While the Scandinavians were spending the early ‘90s forging a suitably frosty template for black metal, the Greeks were busy with their own largely self-contained scene, with bands such as Necromantia, Varathron and of course Rotting Christ creating a notably warmer, more heavy metal-influenced sound. This, the second full length by Rotting Christ, perfectly demonstrates that unique ‘90s Greek vibe with its ancient sounding splendour.

US black metal was relatively inactive in the ‘90s but alongside the likes of VON and Demoncy, Texans Absu were a rare exception. One of the first modern black thrash bands, this second album takes the best elements of both genres and marries them in thrilling fashion, remaining fresh and carrying a touch of the unhinged with it.

Before they began dabbling in electronic music, Ulver were skilfully blending black metal with Scandinavian folk influences and debut album Bergtatt remains one of the strongest examples of that fusion. Revolutionary at the time for its clean sung vocals, it is a record that is often both tranquil and bewitching and highlighted the potential width of the genre at an early stage.

Satyricon’s early output is extremely consistent in quality despite the obvious musical evolution taking place between each release. Third album, Nemesis Divina, captures the band at their most apocalyptic, marching toward biblical Armageddon with a definite sense of swagger and some seriously dramatic and dynamic numbers.

Choosing between Gorgoroth’s first two albums is a tough call and since both last about half an hour, you can certainly afford to play both them back-to-back. Despite the exhilaration of 1994’s Pentagram searing attack, follow-up Antichrist wins out thanks to the variety on show, making use of their trademark violence, doomy melancholy and unashamedly catchy riffing, not to mind two very effective vocalists.

From their early days to the present day, Arcturus have managed the impressive feat of creating music that is at once groundbreaking and experimental, yet melodic, emotional and even accessible. To some extent this magnificent second album helped popularise the concept of avant-garde black metal and it’s very hard not to be swept up with the theatrical, classically inspired tracks contained here.