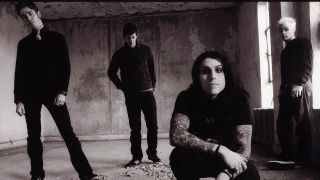 They transcended the punk scene

“I always think AFI are a really great example of what a band can be if they don’t look at a glass ceiling. There are so many rules in rock music now – what’s ‘cool’ or what’s ‘OK’ to do – and I’ve always been frustrated by the idea of alternative music having boundaries. AFI erased those boundaries. At the time Black Sails In The Sunset came out, they were playing with hardcore bands, but they always had a bit more imagination, a bit more going on aesthetically, than those guys. And I can see why they moved away from the hardcore punk scene; it probably got too restrictive for them.”

When they signed to Dreamworks and made Sing The Sorrow, they created a masterpiece. They didn’t just sign up to a major label and make a straight-up pop record; they made an artistic, stimulating and experimental album. I love that about them. They lit a spark in me that made me want to be creative myself. I think a lot of people heard that album and went, ‘Fucking hell, I want to start something. I want to sing, I want to start painting!’ I know a lot of people that wanted to be involved in music because of that band. If you actually think about the sheer amount of creative people that were inspired by AFI, it’s incredible.”

They brought showmanship to hardcore

“I grew up on glam rock, and AFI had all the dressed-up elements that I liked about that. There’s something larger than life about them, and I think Davey Havok is larger than life, too. You just didn’t really know what he was all about; he was a mysterious guy, he was articulate in his lyrics, he was really imaginative. And that’s what I like about AFI; they’re a really smart punk band. Their lyrics are like poetry – and not crappy teenage ‘goth’ poetry. Proper poetry.”

“You never know where they’re going to go next, and that’s what you want your band to be. Your art should be completely unrestricted and not boxed into any standards. Even Crash Love, which a lot of people aren’t into, that’s a weird record. They tried something different again, they committed to it, Davey cut his hair into an 80s Bowie cut, it was really cool, and I liked it! It’s not what people wanted from AFI, but they don’t always want to be making the same record over and over again and again. They’re true to themselves right ’til the end.”

“When I first heard Art Of Drowning, I couldn’t believe that there were only four people playing. Having four people in a band, and each one of them being as good as each other, all amazing… when do you get that with a punk band? One that wasn’t put together by a label? AFI are a one-in-a-million band. They all met each other on the punk scene and all four of them are amazing. And they haven’t fallen out, they’re all still friends now, and all making interesting music.”

“AFI never fully took the mainstream like bands like My Chemical Romance did. A lot of their stuff was always too hard for radio, and a lot of it was too elaborate. They had songs that were too long, maybe songs that were too short as well. Actually, their one massive radio hit – Miss Murder – is my least favourite AFI song. It’s a weird song, it doesn’t fit in with the rest of that album. I like the fact that it brought more young fans to AFI, though.”

This Is Hardcore: AFI – The Art Of Drowning

Five things I can't live without: Creeper's Will Gould