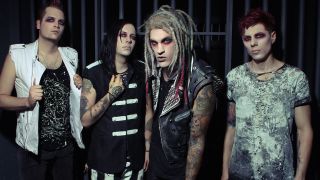 Following in the footsteps of Marilyn Manson, Rob Zombie and Wednesday 13, Davey Suicide's recipe for their own unique brand of goth-tinged industrial blends arena rock with sleaze, punk and theatrics.

Having dropped their new record, Rock Ain't Dead last December, we caught up with the band to discuss some of their more surprising influences, namely the big-haired sleazy glam rockers of the '80s.

What constitutes as sleaze metal is hard to define, but these pelvis thrusting, over-sexed rockstars sit somewhere alongside hair metal and glam rock.  Their sexual prowess was rivalled only by their ability too shred on a guitar, and while their popularity dwindled after the end of the '80s, their influence certainly did not.

Here are 11 of the most incredible and influencial sleazers, according to Mr Suicide...

"Every great trend has top tier bands that define an era and become larger than the scene that blasted them off. Guns N' Roses was that band. They had stars at every position and deviated from the traditional fun hair bands at the time.

"Their punk rock attitude took sleaze/hair metal in a refreshing direction that was dangerous. I always wondered if Axl’s hair style in Welcome to the Jungle was a slight mockery to the 80s hair bands."

"Cinderella was one of the most underrated bands of the hair band era. Next to Axl, Tom Kiefer was my favorite voice from that time period and they wrote so many great songs."

"I don’t know how you can have this list without Motley Crue. I always found this band interesting because some of the supporting cast (Nikki & Tommy) were more popular than Vince. They brought danger to the hair metal scene and catapulted, sex, drugs and rock n roll to life!"

"Skid Row is one 80s bands that I wish could get passed their internal differences and reunite. Self titled and Slave to the Grind were so well written and Baz is a baaaaaad man on vocals. His lyrics painted a vivid picture and rivaled some of the great Aerosmith songs at the time for me. "

"Warrant and Poison teetered the line of sleaze but I consider them close enough. They had a great balance of fun rock with tunes like Unskinny Bop and Cherry Pie and nailed the formula with including ballads like Something to Believe in and Uncle Toms Cabin."

"This may be an unpopular choice but Slaughter and Firehouse wrote great tunes for this time period. I preferred their ballads over their rock songs but the song writing was solid, the vocals and style fit the bill."

"LA Guns was a second tier sleaze band and to me their songs fell short of the big artists. Tracy’s connection to Hollywood Rose and the later birth of GN'R always tied them into the circle trough."

"Winger was important in this era. Not because they were looked at as cool, but because Beavis and Butthead had such a hand in making them uncool. Everyone knew who winger was and you “can’t get enough, it’s never enough.”

"Most times it’s not the first to the party who gets all the credit. I think Hanoi Rocks falls into that category. Although they didn’t get as big as GNR, Poison & LA Guns, they had a hand in influencing those band’s sound and look. All the while, maintaining their own cult following."

Davey Suicide's latest album, Rock Ain't Dead is out now via Out Of Line Music