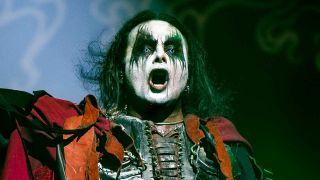 Last weekend Grade II listed Soho theatre, the esteemed London Palladium, played host to blackened Brits, Cradle of Filth, where they performed their 1998 album, Cruelty and the Beast in full.

Released 21 years ago, Cruelty and the Beast is the third studio album by Dani Filth and co and saw the band branch into conceptual territory, with all lyrics based around the legend of Elizabeth Bathory – otherwise known as the Blood Countess.

While it remains one of the band's most influential albums and was numerous 90s goths initiation into the darker side of metal, it sparked criticism for its poor production quality.

For the 20th anniversary, the album was completely remixed and remastered as Cruelty and the Beast: Re-Mistressed – which will finally see its release on November 1 via Music For Nations and can be pre-ordered here.

The band have also previously shared a lyric video for the re-mistressed version of Lustmord And Wargasm (The Lick Of Carnivorous Winds). Check it out below:

The special Cruelty and the Beast show dubbed Into The Pallademonium, saw the band blast through this seminal album, continuing with a second set full of "graven favourites" and deliver, as promised, "a night dead-icated to all things ghoulish, flamboyant and macabre."

If you couldn't be a part of the landmark occasion, have no fear – Hammer were there and we documented it especially for you!

Check out our exclusive gallery: