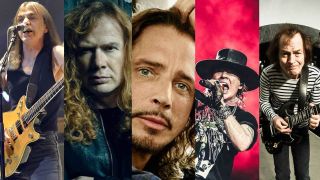 If there’s one thing that 2017 has taught us, it’s that 2016 wasn’t a one-off. Headlines announcing the death of much-loved rock stars have become depressingly commonplace, and we lost a lost this year. Tom Petty, Gregg Allman, Chuck Berry, Chester Bennington, Chris Cornell and Malcolm Young were amongst those who passed on to the Great Gig In The Sky, but only those final two made our most-read news stories of the year.

Chris Cornell’s tragic demise made the Top 10 four times, as news of his death was followed by other stories that clarified the detail. Elsewhere, Dave Mustaine made an appearance in the wake of a shambolic Grammy presentation to Megadeth, and Guns N’ Roses made the list with two stories (neither of which were significant, which gives you an idea of the hunger for GN’R-related news).

Then there was the 1000-strong Italian group whose performance of Learn To Fly convinced Foo Fighters to play in Cesena, and who had a second moment in the limelight when their version of Smells Like Teen Spirit went viral.

Finally, surprisingly, there was a story about us. This time last year, the future of Classic Rock, Metal Hammer and Prog magazines was thrown into doubt after their parent company went bust. The staff were all laid off — unpaid for the month’s work they’d just completed — but within a few short weeks Future plc had stepped in to rescue all three publications.

Chris Cornell: Drugs “did not contribute” to death