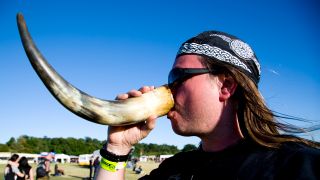 Bloodstock Open Air bars will have a new edition to the array of beers, ciders, wines and spirits this year in the form of MEAD and it's the ultimate metal drink.

In case you are not familiar with mead, it's classic medieval beverage made from fermented honey. it regularly comes infused with other flavours, such as blackberry, elderflower and well, whatever ya like!

The drink was popular with Vikings and is a mainstay in re-enactment circles, where members regularly brew their own. Mead is thankfully growing in popularity once again with Amon Amarth frontman Johan Hegg's company Grimfrost launching their own blends and various mead-makers and bars cropping up across the U.K. and the U.S.

Now, sustainable clothing company Descended From Odin is launching their own version of the drink in collaboration with Lancashire Mead Co. and will be debuting it at this year's Bloodstock Open Air.

Check out the sneak peek below:

So for the last few months we’ve had a top secret brew happening with @lancsmeadco & here is our very first bottle 🖤⚔️ We’ll be launching this at @bloodstockopenair at all bars. You can find us left of main stage! Now, this first ever signed 70cl bottle (retail £25) is up for auction to raise money for our dear friend @shaneknotshaun to support his family whilst he recovers from a severe brain injury. Please comment or DM me your highest bid! Will come with a free tee so let me know your size 🖤 Descended From Odin

The Nottingham-based brand Descended From Odin aim to tell the story of the norse gods and the impact the viking age had on world history through organic and sustainable clothing for everyday and active use.

The company has expanded into beard oils, jewellery and other accessories as well as sponsoring the Jorvik Takeover – an event that runs alongside the Jorvik Viking Festival in York.

Descended From Odin's new mead will be available at all Bloodstock bars – and it's about time! With campsites named for various Norse myths, it is only right they are finally serving the nectar of the gods. So fill up your drinking horn and toast to Odin (or Freya) – Skål/Skol!