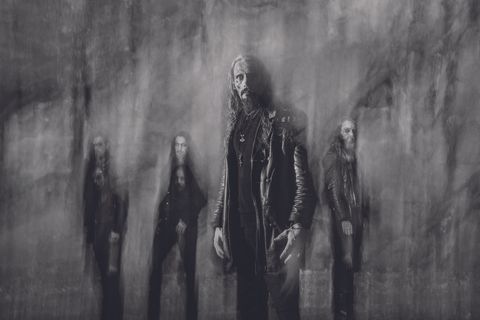 Despite his now-legendary status within the world of black metal (and beyond), Gaahl has lacked a consistent vehicle for his talents since he left Gorgoroth more than a decade ago in a notoriously acrimonious split.

God Seed, formed with fellow Gorgoroth renegade King, imploded just as the group were making a name for themselves, and his first project, Trelldom, has remained dormant since 2007. Hopefully with Gaahls Wyrd he can develop what is still a powerful artistic vision and this album certainly suggests that is likely.

While the band’s live setlist has, until now, relied purely on songs by Trelldom, Gorgoroth and God Seed, GastiR - Ghosts Invited does not particularly reflect this background. The elephant in the room is of course the clean vocals, since the single, Ghosts Invited – the third song here – broadcast that the band would be stepping away from their black metal roots, the track invoking a mix of classic goth rock and Enslaved-style progressive black metal.

It’s an approach that can be found throughout the record, most obviously in the epic march of Carving The Voices, which somehow manages to capture the unique live presence of the frontman, its slow pace and moody atmosphere interestingly also harking back to Gorgoroth’s Sign Of An Open Eye despite the crooning.

With all that being said, rumours of the band’s departure from black metal have been somewhat exaggerated; the discordant guitars, unrelenting percussive bombardment and unearthly screamed vocals of Through And Past And Past and From The Spear reveal the undeniably black metal foundation, the former song capturing the unique spirit of Trelldom, which is something this album (and black metal) would benefit from more of. GastiR - Ghosts Invited might have lost some of the viciousness of Gaahl’s back catalogue, but it’s a potent fresh beginning.

The new record 'GastiR - Ghosts Invited' is available in various formats from here.