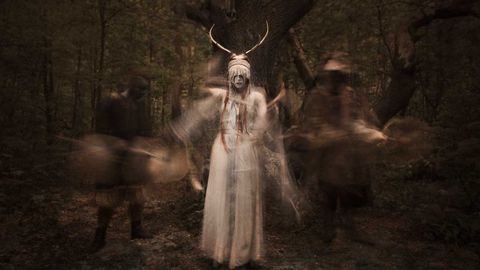 For fans of: Dead Can Dance, Wardruna, Sunn O)))

It’s become a modern cliché that most established bands make a living from live performance these days, such are the financial realities of releasing recorded music in the 21st century. With that in mind, and despite the ancient resonance of their message, Heilung may be one of the most modern bands around, having already made it perfectly plain that their gigs are all-important.

As much as 2014 debut Ofnir set out the band’s sonic stall, it has been several consequent live performances that have propelled this seemingly niche enterprise into something approaching mainstream rock acceptance.

Put simply, Heilung’s core purpose – to remind us of our shared history and intrinsic kinship with one another – makes a hell of a lot more sense amid the celebratory clangour of a moonlit festival show than it can ever hope to do on record.

As a result, Futha seems to exist more as a snapshot of the band’s latest material than as an attempt to reproduce the wild fervour of a Heilung gig. Weirdly, though, it comes pretty close to achieving both.

Opening track Galgadr is all about setting the scene and beckoning us into Futha’s feminine realm; the flipside to Ofnir’s apparently masculine slant. After a typically obtuse, cackled into, the Danes’ trademark blend of overlapping and cyclical vocal mantras and pummelling, hypnotic percussion starts to work its magic.

Evidently this is not music for those with a short attention span, and neither it is going to score highly on your old-school metal-o-meter; but what is undeniable is that Heilung humbly request that you surrender to the enveloping sound and join them at the heart of the action.

Futha’s crystal clear and wildly vivid production job does a lot of the work for them; expansive tribal treatises like Othan and Elddansurin are pointedly designed to transport the listener to higher planes of consciousness, but they are brightly cinematic, too, filling the room with cavernous reverb and ominous tectonic bass. The album’s most beautiful moment, Traust, begins with silence and the faint twinkle of distant bells, before mutating through oscillating, sequenced drones and gothic chord progressions, all underpinned by the repetitive thud of what can only be described as an ingenious and authentic rendering of prehistoric acid house.

Ultimately, Futha’s first hour amounts to a lengthy build-up, strewn with cracked ambience and strange monologues in a variety of familiar and unfamiliar tongues, to its absurdly epic closing track, Hamrer Hippyer. Currently a crowd-mashing staple in Heilung’s live show, it builds like a gathering storm before erupting into a pulsing, priapic, fervently joyful pre-Christian rave of epic proportions.

If this band’s music hasn’t made a lot of sense thus far, this is the song you need to hear: a stomping, howling reminder of music’s unstoppable primal power. Whether the world pays heed to Heilung’s unifying message or not, the mere fact that Futha exists and is likely to reach a sizeable audience is worth an Iron Age knees-up on its own.

Furtha is out now via Season of Mist.