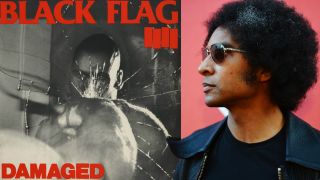 Black Flag was huge for me. When I was getting into my adolescent years I had all these raging emotions that a lot of young boys have, especially boys that come from broken homes and crazy family stuff, and I’d already heard punk. I’d heard the Sex Pistols and stuff like that and it was cool. It was pretty fucking vicious – no pun intended. But what I heard in my head was even more extreme.

When Black Flag came along I was like, ‘This is it. This is exactly what the doctor ordered.’ That unhinged guitar playing that Greg Ginn was doing was amazing. As a fan of Hendrix and avant-garde jazz, he was right there at the centre of all of that and he embraced all of it in his playing. I could tell that what he was doing was deliberate, too. It wasn’t just like, ‘Oh this guy can’t play.’ It was discipline. Later on, I got to know Greg Ginn and it was all confirmed for me. He was like, ‘This is method.’

I went to see the Decline of Western Civilization at the theatre when it was first released. I begged my grandfather to take me and finally he did. He sat through the whole thing and I can’t imagine what he must have thought, but Black Flag were the first band on and getting to see their energy and what they look like was such an eye-opener for me. And having the Damaged album come into my orbit right after that was unbelievable: I was like, ‘Oh my god. OK.’

So Black Flag were definitely the band, and Damaged was the album, that made me realise I could do it myself. Everybody has that band, and for a lot of people it was the Ramones, but for me it was Black Flag.

Right after that my family moved to Atlanta and I had to figure out a way of doing what those early punk bands were doing in that town. I’d just left DC, which had one of the most vibrant scenes ever, but I just found out about it as we were leaving so I didn’t get to immerse myself in it. In Atlanta there was nothing going on like that at all, but the beauty of that was that my friends and I had to create it. Black Flag was the catalyst for a lot of that.

Getting to know your heroes was the beauty of that scene as well. It was so small back then – I’m talking ‘82/’83 – that you got to know everyone that was on your favourite record because they were most likely going to be crashing on your floor when they came through town. And if you wound up in their town at some point you were probably going to crash on their floor, or whoever they could hook you up with. It was that intimate. Black Flag, Bad Brains, Minor Threat and everybody in that scene became my friends, and they were all people that we called on when we needed something. It was a beautiful thing, man.

I can’t think of another time when kids seized the means of production like that. I’m talking about 15 year old kids who were like, ‘We’re gonna book studio time. We’re gonna make a record. We’re gonna call the pressing plant. We’re gonna press up 1,000 of these 45s and we’re gonna sell them through mail order right out of our bedrooms, and then we’re gonna go out on tour.’ It didn’t matter that you were 15 and you couldn’t drive. That’s what my first band Neon Christ did – our drummer Jimmy Demer was 14 when he booked our first tour and neither of us could legally drive so we got some friends of our singer to help out with the driving and we went and did this whole east coast tour. That wasn’t the norm for most kids back then. Now it’s more part of the cultural firmament, and it was really great to be at the ground floor of that. We learned from the best, man – Black Flag.

William was speaking to Matt Stocks. Giraffe Tongue Orchestra’s Broken Lines will be released on September 23 through Party Smasher Inc.