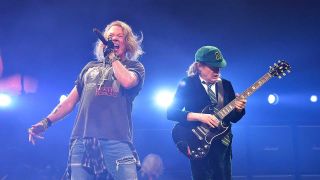 There's nothing the internet loves more than the sweet, sweet smell of fresh bullshit. Mankind's willingness to be suckered by crackpot theories and transparent hooey is matched only by his willingness to churn out such flim-flam in the first place.

It's why Snopes exists, so that the rest of us can debunk the latest nonsense to clutter up our timelines. Is Michael J Fox really dead? No, he isn't, confirms Snopes. Does a new Facebook algorithm only show you updates from 26 friends? No, it doesn't, and you're an idiot for sharing. Are AC/DC currently in Vancouver recording a new album? Hmmm, Snopes is strangely silent on this one. Perhaps it's true.

This story surfaced last week at the website of The Georgia Straight, a lifestyle magazine covering Vancouver, the city AC/DC have recorded in for nearly two decades. They assembled Stiff Upper Lip there in 1999, returned in 2008 for Black Ice, and went back six years later for Rock Or Bust. And now they're back again. Apparently.

"Just scored an interesting news tip from one of my rock 'n' roll sources on the street," wrote The Straight's Steve Newton.

"The guy tells me that he had a quick chat with a couple of members of AC/DC in downtown Vancouver this morning. One of the rockers that he talked to was Stevie Young, Angus Young's nephew, who took over the rhythm-guitar spot in AC/DC from Angus's brother Malcolm in 2014 when Mal started suffering from the health problems, including dementia, that he would succumb to last November.

"...the other rocker my source talked to was none other than, get this: Phil Rudd! Yes, Phil Rudd, the longtime AC/DC drummer who was himself replaced behind the kit by Chris "Thunderstruck" Slade in 2015 for the band's Rock or Bust World Tour."

Discounting for a moment the hilarious notion of a journalist with "rock 'n' roll sources on the street", as if he's a character from Police Squad: The Musical, it's probably best not to dismiss the story straight away. The writer, Steve Newton, has been around the block. He interviewed Malcolm Young for The Straight back in 1983, and you don't get to write for the same publication for that long if you're habitually publishing stuff that turns out to have no actual basis in reality. Unless you're working for Infowars, of course.

Anyway, he's not the only one. Kyle Harcött, singer with Vancouver band Hexripper and host of the That’s When I Became A Metalhead podcast, tweeted that he also ran into Rudd.

Rudd & manager walked by me on way into studio. Rudd wouldn't acknowledge me, & the manager gave me a FUCK OFF look and waved a stern NO DICE in my face. Mission accomplished. 🤣August 3, 2018

So where does that leave us? Well, back in March, Rose Tattoo singer Angry Anderson claimed that AC/DC were working on new material and would record with Axl Rose. AC/DC biographer Murray Engleheart said the same, reporting that the band would continue on with Axl at the helm for a “new album, touring, the whole nine yards.” And Guns N' Roses finished the latest leg of their Not In This Lifetime tour two weeks ago in Reykjavik, so the timing makes sense if he's to be involved.

If you're Angus Young, wouldn't you be tempted to invite Phil Rudd back into the fold? Sure, he's had his troubles, but with Malcolm gone Angus might think that extra link to the past is going to help establish a new album's credibility. Two links to the classic line-up are better than one.

And Rudd? He's told Angus he wants in. And he's been very careful to say nice things about Axl.

It all makes sense.

You know AC/DC aren't going to make an official statement  - everything they do is shrouded in secrecy. But we've been here before, haven't we? Back in March 2016, we ran a story that couldn't possibly be true. AC/DC, having departed ways with Brian Johnson, had been looking for a replacement to complete the Rock Or Bust tour. And guess who was spotted outside a rehearsal studio used by the band?