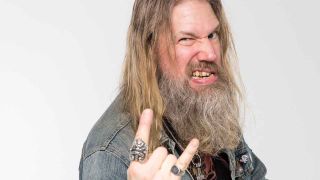 Viking metal kings Amon Amarth arrived on their longboats from the snowy wastes of Sweden two decades ago and haven't looked back since. We captured vocalist and walking man-mountain Johan Hegg to answer your burning questions on Norse mythology, retiring metal bands, beard management and sourcing authentic Viking drinking horns. Well, who else are you gonna ask?

Have you ever thought of doing a full concept album based on stories from the Prose/Poetic Edda or any Norse mythological texts, because I think that would be amazing!
Huw Eggington (Facebook)

“I’ve had a bunch of ideas taken from the Poetic Edda of course. I’m not sure it’s going to be a full concept album but maybe just a couple of songs that I feel could work. I always take a lot of liberties with historical facts; if I want to tell a story, I’ll just modify it a little bit here and there just to make sense. If you go into details, you want to be accurate, so that would be a pretty big project and the ideas I’d have would be pretty massive. It’s something I’d have to sit down and work on for a long time, but I just haven’t had the inspiration for it yet. Sometimes I use the history and mythology as a metaphor for something I want to discuss, maybe something personal, so I’ll alter it a bit to fit the story I want to tell. It doesn’t necessarily have to be super-obvious for everyone but that’s how I work.”

“If I told you, I’d have to kill you! We are constantly trying to evolve and develop our stage show and it’s an ongoing process as we speak, but I don’t want to ruin any surprises so we’ll keep it at that.”

Who would win in a fight between Vikings and Romans?
Mark Vernam (email)

“I think when it comes to fighting spirit, the Vikings definitely have the Romans beat but the Romans had better technology, better equipment and greater numbers so I’d have to say the Romans would win eventually. However, the Romans did lose against the Germanic army, so they were never able to go further north into the Germanic territories and the peoples of Germany and Scandinavia were pretty much the same type of people. Vikings were a lot more tactically skilled than people give them credit for, so maybe they’d stand a pretty good chance, but in an open battle the Romans would outnumber the Vikings.”

When was the last time you were clean-shaven?
@Tid_guh_ (Twitter)

“Completely? 1992. I couldn’t tell you the exact date but that’s when I started growing a beard and I haven’t shaved since. I’ve had a goatee at some point but that still counts as a beard.”

Do you ever get sick of the Viking themes and want to write music about other stuff?
Matt Mills (Facebook)

“I don’t know, I could probably write lyrics about other stuff but I think the Viking theme suits this band very well musically and it’s something I feel very passionate about. It’s easy to write about Vikings and I learn new stuff about them all the time, there’s always fun new things if you dig deep enough.”

What’s your favourite song on any of your albums?
@xXitzEngeLikaXx (Twitter)

“What a question! It always changes because when you listen to your own music, you listen to your own performance a lot. I’ll listen to some because I like the lyrics I wrote for them or I like the way the vocals are on that song. One that comes to mind immediately is from the new album Berserker, The Berserker At Stamford Bridge, both because I’m very happy with how the lyrics came out and the story itself is phenomenal, but I’m also really happy about the vocals and my own performance. I think it’s a really epic and cool song. One song I’ve really enjoyed a lot lately is from Jomsviking and called Back On Northern Shores, which I think is such a cool song. There’s so much stuff going on in there; the vocals are awesome, the lyrics are awesome, the music is fantastic as well, so that’s definitely one of my absolute favourites. There are also a bunch of songs the fans love that I know didn’t come out the way I wanted them to, but people love them. A good example of a song like that is Tattered Banners And Bloody Flags; a lot of fans love that song and want to hear it live but we know what we wanted to have out of that song and we don’t feel we had it. It didn’t come out exactly the way we wanted unfortunately, so that’s always going to be a little thorn in our sides.”

How do I grow a beard?
Elliot Lacey (Facebook)

“Stop shaving! Some people have more beard growth, some have less. I don’t know what your genetics are like so maybe you don’t have beard growth but for me in the beginning, it wasn’t a lot, but as I got older I started developing more beard growth. It runs in the family – my dad has a beard too. I have some friends that can’t grow a beard, they just grow a few strands here and there, everybody’s different.”

Who’s the most famous person you have in your phone?
Jennie Baker (email)

“I’m not sure which one’s more famous than the others but I’ve got Kerry King, Zakk Wylde and Randy Blythe.”

How do you think metal will survive all its legends retiring? We’ve already lost Black Sabbath and Slayer. Can the scene continue?
James Windsor (email)

“Technically we’re not losing them, their music is immortal and it’ll still be there, it’s just the fact that we won’t be able to see them live anymore and that’s the only difference. I think when it comes to live bands, I see a lot of bands that have the potential to fill the shoes of those that are leaving us. Unfortunately, the way the music scene is today, I think it’s really difficult to build a band the size of a proper arena band and it’s going to be more and more difficult, but that’s just my assumption. I saw Black Sabbath at Hellfest a couple of years ago and it was actually one of the best shows I’ve ever seen, they were amazing. We toured with Slayer and they put on a hell of a show, they were absolutely fantastic. Sure, I’m going to miss them but I guess they feel they’ve had their run and they want to try something different.”

“I have a few, both are Norse folk music type of songs that I listen to a lot these days. One is Ur Is Ka Ha So by Folket Bortafor Nordavinden, ‘The People Beyond the Northern Wind’. It’s a really raw kind of Norse music band.”

Where do you get your drinking horns?
@Mopr18 (Twitter)

“There’s this guy in Sweden who makes them. Interestingly enough, it was our guitar player, Olavi [Mikkonen], who found him and then I bought my drinking horn from him and we had him make horns for everybody else in the band. Through my company Grimfrost, we also employed him to make special drinking horns for the company as well. It’s all handmade, every horn is unique because every pattern is designed for each horn – he hand-carves them. Some of them have seen 50-60 hours work going into each horn, so they’re quite expensive but they’re absolutely beautiful and he does a great job.”