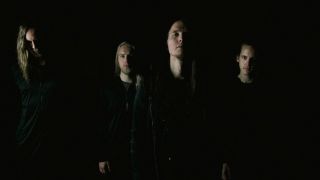 Sweden is one of Europe’s great metal and punk powerhouses. Over the years, this Scandinavian country has thrown up a string of game-changing bands. Meshuggah, Bathory, At The Gates, Ghost… whatever they're putting in the icy water up there, it's working.

And the Swedish underground scene is no less groundbreaking, as progressive deathcore heroes Humanity’s Last Breath can vouch. For the last decade, the Helsingborg four-piece have been at the vanguard of their home country’s extreme metal scene, delivering a body-blow of noise, attitude and technical brutality  showcased on 2019’s Abyssal album.

The band are just about to drop the bludgeoning new standalone single Earthless (check out the video below). We figured it was time to get these underground linchpins to big up their home country’s scene and tell the world about 10 obscure Swedish bands every metal fan should hear.

Calle Thomer (guitar): “This is how I want technical death metal to sound. It's heavy, evil, groovy and has none of that neoclassical wankery. Listen to the first riff in Breeding Exile and the riff at 2:16 in The Hypocrite, Undying and you'll see what I mean.”

Filip Danielsson (vocals): “Fast, uncompromising black metal from Stockholm. With lyrics in Swedish, they convey a melancholic emptiness like no other.”

Buster: “Modern black metal from all over Sweden. Calle and I have taken a lot of inspiration from the song I Bulimia Nervosas Välde from Det Personliga Helvetets Spiral. Very unique and hard-hitting stuff.”

Calle: “Raw hardcore with depressive melodies. I highly recommend checking out The Occupants EP. The song Comfort has such a great ending part in it.”

Buster: “This is a hardcore band I'm writing music for and producing. Including members and ex-members from No Omega, Fever333 and Grieved. You'll hear a lot about Thrown soon.”

Filip: “This band from the backwoods of Sweden has created a unique sound by adding new elements to an otherwise very copied style. I've heard they are great live as well but have not yet been able to see them play.”

Buster: “I just had to add Stoort Neer to the list even though it's Calle’s solo project. It's still underground and relatively unknown. Progressive riffs with a very unique melodic twist. It has everything from technical death metal to melodic, almost poppy melodies.”