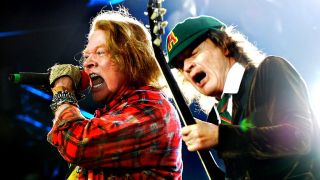 On March 7, 2016, AC/DC issued an official statement that was as blunt and to the point as one of their songs. It read: “AC/DC are forced to reschedule the 10 upcoming dates on the US leg of their Rock Or Bust world tour.

“AC/DC’s lead singer, Brian Johnson, has been advised by doctors to stop touring immediately or risk total hearing loss. Tomorrow’s show in Atlanta through Madison Square Garden, New York in early April will be rescheduled, likely with a guest vocalist.” And with that, Johnson’s 36-year tenure with the band seemed to have been brought to an abrupt end.

He was, of course, not the first casualty of the troubled Rock Or Bust campaign. Nineteen months earlier, the band confirmed that Malcolm Young, their de facto leader, had been stricken with dementia and was unable to continue with them. And that November, drummer Phil Rudd was arrested and charged with attempting to procure a murder, threatening to kill and possession of methamphetamine and cannabis. The murder charge was subsequently dropped, but by then Rudd had been booted out of the band.

Even without two-thirds of their crack rhythm section, the band soldiered on. In came Malcolm’s nephew, Stevie Young, on second guitar, and Chris Slade on drums, both of whom had ably filled in at different times before.

The tour proper kicked off on May 5, 2015, and for a while the ship appeared to have been steadied. AC/DC without Malcolm Young and Rudd didn’t have quite the relentless propulsive force, but they were recognisable as the same band.

Johnson’s departure, though, gutted them. He had arguably made only one great record with the band, 1980’s Back In Black, but he had their heart and soul for so long that it didn’t seem feasible that they could continue without him and as if nothing had happened. This sense was exacerbated by the apparent cold-hearted brutality of the way Johnson had been jettisoned. Days after AC/DC’s press release, his friend, comic Jim Breuer, used his popular podcast to claim that Johnson had told him he had been “kicked to the kerb”. “And his luggage that he toured with showed up at his driveway,” Breuer expanded. “There’ve been no calls. No ‘How’s your hearing? How’s your health? What’s going on?’ Boom – here’s your shit, nice to know you.”

Both parties moved soon enough to mitigate this collateral damage. On April 16, AC/DC issued a second statement, thanking Johnson for his “contribution and dedication to the band through the years” and wishing him well. In an interview later with the BBC’s 6Music, Angus said that Johnson had been suffering with his hearing since the start of the tour. “It was Brian’s call,” he insisted. “And it was a shock to us, too. The last thing you want to do is walk away from something. But you don’t want someone in a tragic situation – being deaf, or any other affliction.”

Three days on from the band’s statement, Johnson issued his own. He explained through it that the root of his problem was not AC/DC’s on-stage volume, but as a result of indulging his passion for motor racing. He had some years ago, he said, not worn earplugs for a race and suffered a perforated eardrum. He also thanked Angus and Williams for their support, adding that he intended to carry on recording and still hoped he might be able to perform live again in some capacity.

Doubtless this was a well-co-ordinated bout of quid pro quo, and it did dampen some of the bitterness surrounding Johnson’s enforced departure. But as Johnson should have known well, AC/DC have never as a rule traded in niceties. After all, he was brought into the band and set to making Back In Black just weeks after the death of their original singer Bon Scott. And, true to form, in the same statement that they acknowledged Johnson’s role in the band, AC/DC also announced Axl Rose as his replacement for the remaining tour dates.

Rose somehow seemed at once a calamitous and yet perfect choice to help them see out the tour. Certainly his king-size ego and penchant for keeping audiences waiting for hours at a time was entirely at odds with the blue-collar, men-of-the-people ethos that AC/DC had long cultivated. However, with his adaptable singing voice he would be able to summon the lascivious leer of Scott and also hit the higher registers that had now started to be beyond Johnson’s range.

AC/DC’s fans took some convincing. Early reports suggested that when Rose was announced, there was a rush to have tickets refunded for upcoming shows in the UK and Europe. That he had broken a foot and had to perform his opening shows with AC/DC in a leg cast and seated didn’t help matters. Yet in the event, Rose and the band did a creditable job. They rocked hardily enough, and Rose brought with him a sense of malice and latent danger. There could be no escape from the fact, though, that it was like watching a stellar AC/DC tribute act that Angus had joined.

That impression was reinforced by the band being dealt yet another shuddering blow as the tour neared its end, when Cliff Williams announced his retirement. The model of the strong, silent type, Williams said he wanted to devote time to his family, but allowed that AC/DC was “a changed beast”. One might have hoped that this would be the end of things and that AC/DC, having survived the trials of Rock Or Bust and just about kept their dignity intact, could now be laid to rest, their legacy preserved. However, that wish would appear to be in vain.

As the tour wound down in September, Angus Young was non-committal on the band’s future and has remained predictably silent ever since. But suggestions have leaked out that he intends to soldier on, backed by Rose, Stevie Young and two more hired guns, for one more album and tour at least. Inevitably this would reduce AC/DC to nothing more than a branded product, with Angus the last man standing. And yet, with the tour having grossed more than $200 million and his entire adult life having been divested in this one single-minded pursuit, what else is there for an overgrown schoolboy to do?

The 10 Worst AC/DC Songs Of All Time

Buyer's Guide: How to buy the best of AC/DC