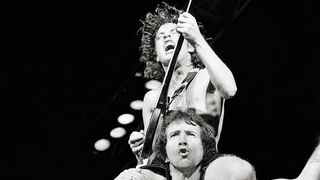 After having the Dirty Deeds album refused a US release by their record company because the suits simply didn’t think it was good enough, it was do or die time for AC/DC.

In typically reactionary fashion, however, what the Young brothers decided to do was not to soften their approach – as Atlantic had insisted, in order to gain radio play in the US – but to double down and produce their hardest, most uncompromising album yet. It was a two-fingered salute to their critics, defiantly titled Let There Be Rock.

“There was always a siege mentality about the band,” says their then bassist Mark Evans. “Once we found out that Atlantic had knocked us back, the attitude was: ‘Fuck them! Who the fuck do they think they are?’”

You can hear that attitude throughout the album, beginning with the sound of a whisky-guzzling Bon counting in the intro to the knee-trembling Go Down – a song about a real-life groupie from Melbourne named Ruby (as in Ruby Lips, though her actual name was Wendy), known for her fondness, apparently, for ‘lickin’ at that lickin’ stick’.

There was also a detectable edge, a nasty side to some of the material, like Dog Eat Dog (‘Businessman when you make a deal/Do you know who you can trust?’) and Bad Boy Boogie (‘I said up/They said down/I do the bad boy boogie/All over town’) where Bon’s sneer is matched by Angus’s furious soloing, the rest of the band pounding away, as if speaking directly to the suits in New York.

Not that they’d lost their sense of humour, of course – the tremendous title track saw to that. Buzz Bidstrup, drummer with The Angels, recalls visiting the studio and seeing Angus recording the solo while “climbing all over the amps and rolling around the floor”. Angus later recalled seeing smoke “pouring out of the fucking amp” at the end of the Let There Be Rock take. “It melted,” he cackled.

But, for Mark Evans, the real hero of that track was Phil Rudd. “We did two takes, and at the end of the first one I remember thinking: ‘That’s the end of Phil for a couple of hours.’ But Phil said: ‘Let’s go again now.’ I thought the guy was gonna fucking explode! They used the second take.”

The whole album sounds like it’s on the verge of spilling over into total chaos. Recorded as-live, mistakes were tolerated if the vibe was strong enough, the energy audibly crackling over the speakers on tracks like the romping Overdose, with its faltering, feedback-heavy intro, and Hell Ain’t A Bad Place To Be, with its huge, bitch-slapping riff.

“To me it’s like the band’s Brown Sugar,” says Evans. “I mean, if you’re a purist and like the guitars being completely in tune and things being completely studio-sterile, that song’s gonna kill you, cos the guitars are whomping all over the place out of tune. But it’s just got that nasty, gritty feel about it that says AC/DC.”

They saved the best for last, though, with Whole Lotta Rosie, about another real-life friend of Bon’s lickin’ stick. This one, though, ‘weighing in at nineteen stone’. With its staccato, looking-for-trouble intro and roguish vocal, Whole Lotta Rosie was to become AC/DC’s signature song: typifying the band at their most animalistic, yet transcendent, in the same way Whole Lotta Love, from which it cheekily pastiches its title, had done for Led Zeppelin.

There was even one track deemed too sordid for poor American ears: Crabsody In Blue, a swinging blues based on Bon’s sexual history since finding fame: ‘Well, they move on down and they crawl around…’ It was replaced in the US with Problem Child, from Dirty Deeds. Poor loves.

Let There Be Rock was the first AC/DC album not to crack the Australian Top 10. In the UK it reached No.17, in the US it didn’t even make the Hot 100. Nevertheless, it remains one of their best – the first truly classic, no-duds-allowed AC/DC album.

For a while, the chances of them making an equally fine follow-up seemed slim. Mark Evans was given the boot, to be replaced by Englishman Cliff Williams – who couldn’t get a visa to perform in Australia. Atlantic in New York would have liked the group to give Bon the boot too, now blaming his vocals for the band’s lack of radio play. But again, the Young brothers decided to knuckle down and prove everybody wrong. Which they did, quite spectacularly, with Powerage.

By the time they were ready to go back into the studio in January 1978, Malcolm and Angus knew that this time they would have to do more than go in empty-handed, throwing it all together as best they could in a fusillade of alcohol and fags and making-it-up-as-you-go-along Aussie spunk. Powerage would have to be their heaviest record yet, and also their most musical. It would need to show what AC/DC could do, demonstrating the one thing critics had got into the habit of expecting them not to achieve: growth.

“They were never shy, but Powerage was where Malcolm, in particular, really wanted to show they were good musicians too,” recalls their then manager Michael Browning.

As a result, Powerage would take longer to record than previous AC/DC albums, with ad-hoc sessions spread across several weeks at the start of the year. Experiencing fully for the first time the midnight oil-burning intensity of AC/DC in the studio, Cliff Williams, for one, was convinced Powerage was special.

Even though the sessions were spread out, when they started work in the studio “we got there and got down, and did the long-hour days… It was really a tremendous experience.”

Conceived as a showcase that would place AC/DC right up there with the American superstars they were now sharing stages with, Powerage was split down the middle between yet more ton-up AC/DC classics such as Down Payment Blues, and more elliptical tracks such as What’s Next To The Moon.

In the former, the difference in mood is pinpointed by the change in perspective of Bon’s lyrics. He was still writing about the long way to the top, but no longer self-mythologising, talking instead of ‘Feeling like a paper cup/Floating down a storm drain’. The latter, with its circular guitar figure replacing the juddering block chords of yore, was the most transcendent moment on any AC/DC album yet, the lyrics staring past love and pain, focusing instead on that thing just out of reach.

Whether intentional or not, it had the same yo-yoing dynamic throughout its nine tracks: one moment a perfect-10 rock monster like Riff Raff, its crazed, spiralling riff belying its solitary verse about being ‘Down in Mexico’, the next moment another seductively mid-paced stroller built around a tight, almost pop guitar figure: Gone Shootin. This time, though, the subject matter is truly murky. A song about a girl who ‘sure is loaded’ and ‘never says bye bye’, it’s a direct reference to Bon’s on-off relationship with his girlfriend Silver, the stoned travelling woman who is permanently ‘gone, gone, gone’.

Of the remaining tracks, the lines between old-school, go-get-’em AC/DC and new, more measured, see-what-we-can-do AC/DC are pleasingly blurred. Sin City begins like classic AC/DC – towering intro, all-guns-blazing riff – but again the story is much deeper. On the surface, about a gambler going ‘in to win’ in Las Vegas, it’s also a metaphor for the assault AC/DC were now intent on making on the US charts. With its low-slung guitars and chugging drums, Gimme A Bullet sounds more like the Lynyrd Skynyrd number it almost steals its title from than anything AC/DC had put down on vinyl before. Again, the song – about a girl who tells her guy: ‘Now you go your way and I’ll go mine’ – seems to refer back to Silver, with Bon crying for a ‘bullet to bite on’ to help him with his pain.

The final two tracks, Up To My Neck In You and Kicked In The Teeth, also exemplify this new dynamic. Although both date back to the earlier Powerage sessions of six months before, only the latter sounds like it comes from an earlier era, Bon literally screaming over the intro about a ‘two-faced woman’ telling ‘two-faced lies’.

Up To My Neck In You sounds more modern, Bon once more up to his neck in whisky-women and good-bad times, but the guitars and drums move with a staggered grace that has more to do with the Rolling Stones than with the wall of block chords that AC/DC had previously relied on.

There was one other track, Cold Hearted Man, but that only made it to the very earliest vinyl editions of the album released in Britain – and these days it isn’t included on any of the CD or downloadable editions. In truth, it’s no loss. It’s the track that replaced it – the deliberately pop Rock’n’roll Damnation, recorded at Atlantic’s insistence, again to try to bait American radio – that caused the real controversy, at least among the band, who genuinely hated it. For the rest of us it was simply one more catchy tune.

But when Powerage also failed to excite the charts in America, Atlantic were ready to throw in the towel. Then someone had a brainwave: how about if they did a Kiss? That is, release a best-of package under the guise of a live album, the way the similarly radio-challenged Kiss had done with Alive and Alive II?

So it was that on the third night of their UK tour in April 1978, headlining Glasgow Apollo, they recorded the show for what would become the first AC/DC live album: If You Want Blood You’ve Got It. Along with other dates recorded that summer in the US and some going back to a 1976 tour of Australia, If You Want Blood would serve as both documentary proof of AC/DC’s growing status as one of the premier league live rock acts in the world, and as a de facto best-of.

Producers George Young and Harry Vanda had done a good job of sprucing it up for mainstream consumption, mixing out obvious mistakes, choosing the best takes of the tracks, cleaning up the lead and backing vocals and bringing the whole package up to studio standard, as was common for officially released live albums, then as now.

These were just the trimmings, though, to a dish that needed little adornment. AC/DC live were a genuinely thrilling proposition. Released on Friday 13, If You Want Blood would include all the obvious crowd-pleasers like The Jack (its strictly live, ‘dirty’ lyrics included on record for the first time); Whole Lotta Rosie (with a new crowd chant of “Angus! Angus!” over the juddering intro recorded for the first time, thereby embedding it forever into the consciousness of all future generations of AC/DC concert-goers); and lengthy, barnstorming encores of Let There Be Rock (distinguished by the very real roar of approval from the Glasgow crowd at seeing the band return to the stage wearing Scotland football shirts); and Rocker, cleverly edited down from its usual 12-minutes-plus to a more radio-accommodating three minutes dead.

As a result, If You Want Blood finally opened the doors of the UK Top 20 for AC/DC, eventually climbing as high as No.13.

America, though, still stubbornly refused to buy it. What would the band do now?