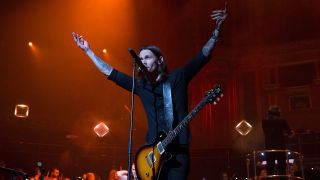 Kicking off their latest European run with two special sold out shows in the prestigious surroundings of London’s Royal Albert Hall, Alter Bridge were joined for the occasion by the Parallax Orchestra. Having previously worked in the same venue with Bring Me The Horizon, the assembled throng of strings, horns and percussion had already had one successful outing with rock, but could lightning strike twice with the American veterans?

Strings and guitars just go together

From Deep Purple’s bold steps in this very venue with in 1969, orchestras have formed an increasingly close-knit relationship with hard rock and heavy metal through both one-off spectacles and the increasingly opulent realms of symphonic metal. But although this might not be a revolutionary partnership, it’s still enthralling to see the likes of Ghost Of Days Gone By given a new bombastic dimension.

It really works… for the most part

Simon Dobson and the Parallax Orchestra must be given enormous credit for the sheer scope attempted tonight. Though during the stadium-sized choruses of Open Your Eyes and Brand New Start the strings merely act as support to push things higher, there are some incredible arrangements that really take things into completely new territory. Though it muddies Lover and the acoustic Wonderful Life, the frantic pace of The Last Hero jostles with the band for position while the orchestra dominates The Writing On The Wall sounding like a soundtrack to a cavalry charge across the Eurasian steppes.

Unsurprisingly everyone is loving it

Though it’s sometimes hard to really judge a rock audience in a predominantly seated venue, the singing that breaks out during Watch Over You and Blackbird and the huge reaction to rarely played Words Darker Than Their Wings is enough to underline the eminence of the occasion. Not only are the band even more enthusiastically charged than usual – if the gurning faces on display during the guitar solos are anything to go by – but their amassed backing musicians also clearly revel in each composition.

There are few more deserving than Alter Bridge

Having emerged 13 years ago as a curiosity from the ashes of enormo-rockers Creed, and perhaps taken a backseat to collaborations with Slash and Led Zeppelin rumours, Alter Bridge have steadily gone about their craft with little fuss or fanfare, building a dedicated fanbase through nothing more than graft and consistently great songs. The humble appreciation shown by a constantly-grinning Myles Kennedy at this landmark night in the band’s career before his towering voice takes hold is another reminder of what an unassumingly special band they are.

It’s the most important (metal) issue of our time: who are the next festival headliners going to be? After their previous billings and tonight, surely no one can now deny it’s Alter Bridge’s time. They have the show, the voice, the chops, the diehard fans who travel from far and wide but, above all – as they demonstrate throughout this 22-song set – they have the anthems that can dominate a headline set in front of tens of thousands. Just who else will be joining them at Download 2019?