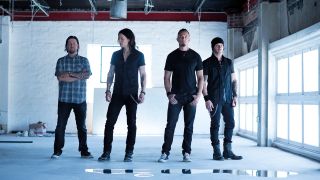 We wrote it in a day

“We started Alter Bridge when Creed was coming to an end. Me and Scott Phillips [drums] were sick of everything going on on a personal level. I wrote as much as I could and had demos for about half the record like Broken Wings and In Loving Memory before I started searching for a singer – I didn’t feel I was strong enough to be the singer of the band. We finally found Myles [Kennedy, vocals] and got into writing. Metalingus came from us jamming together. It all started with that main verse but it came together really quickly. I think we wrote it in a day.”

The title was a joke

“We had a dry erase board on the wall where we had categories of songs in different stages of development. When the song was done I went to the board and as it had no title, for a filler I just wrote ‘Metalingus’ off the top of my head to be funny. The record label owner came to hear us play and when he asked what the name of the song we just played was, we told him and explained it was just a filler title. He said, ‘No, you’ve got to name that song Metalingus, it’s a great name!’ So we did. Honestly, I just came up with it off the top of my head.”

“It’s got a real rock’n’roll vibe to it and it’s still one of my favourite songs to perform. On that record cycle that was the most fun song to play and I don’t think Metalingus has ever been off the setlist. It’s one of those songs, you know? On The Last Hero there are certain songs like Island Of Fools that will never be released as a single but they go over well live and people gravitate towards them as we constantly play and develop them. Until you get out there and tour you never know which ones are going to stick.”

Even I don’t know what it’s about

“Myles wrote the lyrics and I know all the words, but I always just rock through the song and I’ve never really thought about it. I think it’s about fighting through adversity and conquering something in your life, seeing things clearly and moving on past it; that’s my take on it. I really like ambiguous lyrics. I like everyone to take their own meaning from a song. Sometimes it ruins it when you do interviews and explain an album track-by-track, telling everyone what the songs are about. You could ruin it for someone because it could mean something important to them and you tell them it’s about something different to you.”

It became a wrestling anthem

“[WWE legend] Edge was just a fan of the band and asked us if it was OK if he chose Metalingus as his entrance music. He ran with it and it got a ton of exposure that way. I’ve had a lot of people come up to us and say they were introduced to the band because of that, so we owe Edge a big favour. I ran into a Top 10 list of WWE intro songs on social media, where Metalingus was Number One and I Am A Real American, the Hulk Hogan song, was Number Two!”

It impacted on our songwriting

“When you write an album and tour it, you realise the next record you’re going to write needs songs that are fun to play, so those riffs are always more fun to perform live. With our records now, more than before, we try to write songs that are more dynamic. It makes you want to write bigger, heavier, nastier, more energetic songs. The best part about being a songwriter or an artist is taking something that didn’t exist and creating something that moves people. My favourite thing to do is being able to create. Music is a magical thing.”