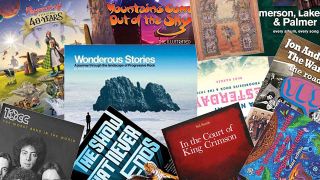 Got some time on your hands? Tuck in to one of these progtastic books, all published or revised in the last decade. From detailed band biographies to in-depth history books charting the highs and lows of progressive rock, we’ve selected 12 tomes you really must read. Grab a cuppa and some biscuits, and get stuck in!

In The Court Of King Crimson: An Observation Over 50 Years – Sid Smith

What makes this expanded edition an exceptional, engrossing and complete read is the amazing access its author has. Sid Smith first saw the band at Newcastle in 1972, some 20 years later he met Robert Fripp, who has since described Smith as ‘King Crimson’s historian’.

Drawing on interviews with all members of the band past and present, the book charts their 50-year career. Authoritative, revealing, and just a damn good read, this is as close as most of us will get to The Court.View Deal

What makes Mike Barnes' account on progressive rock stand head and shoulders above the rest of the crowd is the way he's placed the experience of the actual players themselves front and centre of his compelling narrative.

Barnes, a seasoned journalist whose 2000 biography of Captain Beefheart should be on any aspirant rock writer's reading list, has interviewed all of the key movers and shakers on the scene over the years and it's their voices that give the book its narrative drive and force. At more than 600 pages this is the detailed and comprehensive account that the genre has been waiting for.View Deal

10cc: The Worst Band In The World: The Definitive Biography – Liam Newton

Updated and expanded edition of Liam Newton's definitive 10cc biography. The story’s solidly told, from the pre-history (Graham Gouldman and Eric Stewart were of course key players in the 60s), through the Strawberry Studio days to the hits and halcyon albums.

Then there’s the difficult period, with fall-outs and Stewart’s grim 1979 car accident. It's a thoroughly enjoyable and informative read. As Kevin Godley’s said, “Quite a story. Lots of stuff in there I didn’t actually know.”View Deal

Jon Anderson and The Warriors: The Road To Yes – David Watkinson

Billed as their first ever official illustrated history, The Ballad Of Jethro Tull is a sumptuously presented hardback volume packed with striking, often unseen photography as befits a band who at the height of their success were as much about visual as musical entertainment.

Constructed purely as an oral history and compiled by writer Mark Blake, who also conducted many of the interviews, it’s essentially a rolling tapestry of quotations from band members and management – which makes for some great anecdotes and lots of quirky detail.View Deal

It is presented in a handsome book that includes Pendragon’s characteristic Arthurian artwork, a smart essay from frontman Nick Barrett, and photos from every era. Pendragon have still got it, and may that never change.View Deal

American writer and record collector Charles Snider covers such a wide musical area here, that his definition of the progressive rock genre is temporal rather than stylistic, in that it was initially made by a particular generation of (mostly) men who were mainly from the UK, although he also includes groups from across Europe.

The format consists of chronologically arranged album reviews – now over 500 – some of which include mini histories and references to other releases by the bands in question. This is a convincing personal choice presented with critical acuity and a fan’s enthusiasm.View Deal

ELP have basically admitted that they never again reached the heights of 1973’s Brain Salad Surgery and while Goode writes in a lively and enthusiastic style throughout, he clearly relishes chronicling the group’s classic period, while keeping a cool critical head when assessing later albums such as Love Beach and Black Moon.

He also highlights ELP’s widening creative differences and their attempts to preserve their identity when under pressure to modernise their sound.

Prog expert, and Summer's End co-founder, Stephen Lambe guides readers through prog's early years looking at how the music was received and adapted outside the UK, particularly in the USA, Italy and Scandinavia.

He also explores the 70s scene, 80s revival and 90s movement, following through to prog in the present day. Lambe is knowledgeable, passionate and enthusiastic about his chosen subject.View Deal

Mountains Come Out Of The Sky: The Complete Illustrated History of Prog Rock – Will Romano

Mountains Come Out Of The Sky chronicles prog's artful beginnings from The Beatles, Zappa and Syd Barrett-era Pink Floyd, through to modern greats Marillion, IQ and Spock's Beard, via Rush, Yes, ELP and Genesis. Big, bold and beautifully illustrated.View Deal

The Show That Never Ends: The Rise and Fall of Prog Rock – David Weigel

Along the way, he tackles that tricky question - what is prog? – and explores how it arose from psychedelia and heavy metal, why it dominated the charts and what fuels its resurgent popularity today.

Published in a generously illustrated coffee table format, Wonderous Stories travels in roughly chronological order from the genre’s birth in the hazy aftermath of psychedelia right up to the present day.

Prog Editor Jerry Ewing casts his eye over the cornerstone albums that built the genre, as well as those more recent releases that have provided extensions and renovations. Plus, there are scenic detours via krautrock, art rock, fusion, the Canterbury scene, and progressive metal along the way.
View Deal