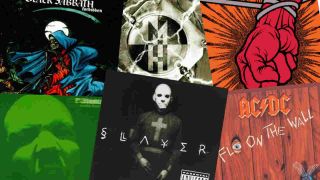 Everybody has an off day, no matter how infallible they are. The problem for bands is that their off days can be preserved on album for the rest of eternity or until civilisation finally collapses, whichever comes first. Call us cruel, but we've assembled 10 bona fide turkeys that prove even metal’s greatest bands occasionally brainfart in public. Happy listening – and remember they all made much better records than these…

Yeah, Metallica’s collaboration with Lou Reed on Lulu was hard to swallow – but it was meant to be. On the other hand, St Anger was simply all over the place - the work of a brilliant band who really weren’t having a good time of it. James Hetfield’s self-lacerating lyrics sound like a man working out his issues in public, which wouldn't be a bad thing if they weren’t set to a bunch of songs that went nowhere and took an eon getting there. And let's not even start on that drum sound. Lars can retcon it as some kind of art statement or deliberate self-sabotage, but it was just a terrible decision. Sad but true, as somebody once said.

When Slayer released Diabolus In Musica in the late 90s, the general reaction was, 'What in the name of Beelzebub are you thinking?'. Those nu-metal grooves were unworthy of thrash’s all-time heavyweight champs even then, and it hasn’t got better over time. Don't believe us? Just ask guitarist Kerry King, who has no time at all for this runt of the Slayer litter. “That was definitely my darkest time as a musician,” says ol’ shiny bonce, and we're not about to disagree.

Without any doubt the weakest moment in the Machine Head cannon, Supercharger came at a time when both the band and the metal scene were in a state of flux. As the third generation dregs of nu-metal became the dominant force in our world, Machine Head were looking to recover from the confusing The Burning Red period with a return to their roots. Unfortunately Supercharger did nothing of the sort. It’s a horribly compromised record, lacking the heaviness of their earlier material or the quality of songs of their most recognisable work. And the production is paper thin. A turkey.

You were expecting Blaze Bayley, right? Wrong. It may feature Iron Maiden’s only number one single, the enjoyably daft Bring Your Daughter To The Slaughter, but the follow-up to the mighty Seventh Son From A Seventh Son now sounds like a misguided attempt to get back to basics. Thanks to the hook-free likes of Fates Warning, No Prayer For The Dying is Maiden’s worst album by some distance. Mother Russia is pretty funny, though.

It was all going so well for Megadeth, wasn’t it? The follow-up to the widely acclaimed Th1rt3en should have been another corker, not least because Dave Mustaine’s mojo was very much perked up after his band’s mid-noughties revival, but Super Collider was a hideous disappointment. Plodding, banal and lacking any chutzpah, it was a half-arsed attempt to strip things down to hard rock basics and, one or two half-decent tunes aside, it went down spectacularly badly with even the most diehard ‘deth-heads. Yawn.

For 1983’s Flick Of The Switch, without Mutt Lange as producer the band had taken the DIY route, and it worked. With its stripped-down, bone-dry sound and some meaty material, it’s their most underrated record. But with Fly On The Wall they lost the plot. As co-producers, Malcolm and Angus somehow made AC/DC sound like a tribute act on a bad night, and as writers all they could muster was one half-decent song, Shake Your Foundations. All told, the album is a disaster. Still: some people like it.

When Tony Iommi calls Forbidden “a total shambles”, he’s being too kind. This is by far the worst album Black Sabbath ever made. It was recorded with the same line-up that had made Tyr: Iommi, singer Tony Martin, bassist Neil Murray and drummer Cozy Powell. But this time there were two new faces on the team. And their influence would prove disastrous.

The album’s producer was Ernie C, guitarist for rap-metal band Body Count. His tin-pot production made Sabbath sound like a pub band. And when Body Count’s leader Ice-T rapped on Illusion Of Power, the whiff of desperation hung heavy in the air. Forbidden was Sabbath’s nadir. But just two years later, the reunion with Ozzy restored the band’s legendary status.

Mötley Crüe’s last album for Elektra Records was a disaster. During the making of Generation Swine, Vince Neil was persuaded to rejoin the band in place of the guy who had replaced him, John Corabi. But the result was not the classic Crüe comeback fans hoped for. Instead, Generation Swine was a piss-poor alternative rock record that promptly died on its arse. From the Marilyn Manson pastiche of Find Myself to the fake-punk title track, the Crüe sounded hopelessly out of touch. The only decent song, Afraid, comes on like a post-grunge Cheap Trick. The worst, Brandon, is a sappy orchestral ballad written and sung by Tommy Lee for his newborn son. Vince Neil has described this album as simply “terrible”. Tell us something we don’t know, dude.

Results did indeed vary when Limp Bizkit’s fourth LP – and first without iconic guitarist Wes Borland – rolled onto shelves with the force of a lacklustre, late-night fart. Eat You Alive and Gimme The Mic admirably tried following Chocolate Starfish And The Hot Dog Flavored Water with their Full Nelson-esque bouts of aggression and catchiness, but otherwise this record is a bit cack. Borland’s absence is painful, leaving vocalist Fred Durst and Snot guitarist Mike Smith to churn out woeful ballads and stuff like Creamer (Radio Is Dead) and Let Me Down: mid-tempo, lifeless crooners that make Staind sound like Cattle Decapitation. Sure, Durst dubbing himself “The inFredible D” in Phenomenon is funny enough, but Terry Date and Rick Rubin produced this album – even that wasn’t enough to save Results May Vary. And let’s keep that cover of The Who’s Behind Blue Eyes locked away. Forever.

It’s unfortunate that All Hope Is Gone is the final recorded document showcasing the classic Slipknot line-up when it’s such a deeply flawed record. Within two years of its release bassist Paul Gray had passed away, and three years after that drummer Joey Jordison was unceremoniously ousted from the band.

But while those events were tragic and regrettable, it is clear that something needed to change in the Slipknot camp, as their fourth album does not hold up well to scrutiny. Songs like the messy title track and the forgettable Dead Memories bear little resemblance to the powerhouse that Slipknot previously were. Even the albums one saving grace, the anthemic Psychosocial, is essentially an inferior retread of better songs than their previous albums.