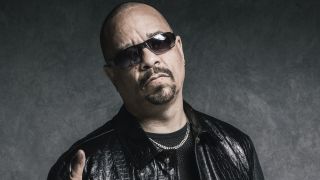 Gangsta rap’s pioneering Original Gangster discovered his cousin Earl’s heavy metal collection in his early teens. Growing up around South Central gangs, he read voraciously, memorised and recited Iceberg Slim’s semi-autobiographical tales of pimping to his school friends before sliding into a life of crime.

During a four-year stint in the United States Army’s 25th Infantry Division, the man born Tracy Lauren Marrow discovered hip-hop. On returning to civilian life he took up rapping, and by combining Schoolly D’s urban realism subject matter and Iceberg Slim’s pimp-life stories with metal loops and beats, he rapidly reshaped the rap landscape and rose to become one of the genre’s biggest stars. He returned to his metal roots to form enduring hardcore outfit Body Count, and since ’84 he has enjoyed a concurrent acting career that has led from rapsploitation B-pic Breakin’ to a regular role in NBC’s Law & Order: Special Victims Unit via New Jack City.

He lives in New Jersey with his wife Coco-T. Body Count have just released their uncompromising sixth studio album, Bloodlust.

AMERICA IS STILL A DIVIDED NATION

My mind is blown by the American public’s decision to elect Donald Trump into the presidency. I really didn’t think that that guy could become president. But it’s let me know there’s still an underbelly of people in America that are attracted to his style of politics. Which is scary.

Obama’s presidency showed us that although there’s still racism in the United States, it’s nowhere near as racist as it was twenty years before Obama, or even ten, because black people only make up fifteen per cent of the American population, so the only way Obama could have got in was because white people voted for him. I’d say it was hip-hop got him into the presidency, because the people that voted for him were Public Enemy, Ice-T and NWA fans, who were more willing to see a black man in the presidency. That could never have happened during the Bush years, because we hadn’t drawn closer. But now Trump’s reminded us that there’s still an underbelly of angry, racist people in America. They say Trump’s a reaction to Obama. But each new president represents a pendulum swing. Just as Obama was a reaction to Bush, so Trump is a reaction to Obama and the next president will be a reaction to Trump. But for now we’ve got to get used to it.

I don’t think this dude’ll make four years, let alone eight. I actually think Trump’s going to get dealt with by his own people. He’s fucking with the CIA. I mean, what president fucks with the CIA? Are you kidding me? It’s like if your prime minister started calling out MI6. Really? Don’t make enemies of the secret agents – not the people who will have you die of ‘natural causes’.

Would I ever stand for election to the presidency? Hell no. I already got out of crime, man.

As far as I’m concerned, Black Lives Matter is not a term of power, it’s a term of despair. Come on, of course we matter. But when you get to the bottom of it, I don’t think any human lives matter in the scope of globalism. When it gets to the real gangsters, they’ll take any of our lives if we come between them and a dollar. They’ll wipe out rainforests without a second thought, so human lives are nothing more than collateral damage to them: poor blacks, poor whites, red, yellow, brown, it’s all the same to them.

The powerless have no voice when divided. So looking at the bigger picture, the real global gangsters’ object is to divide us and conquer us, to keep us fighting each other – black against white, man against woman, Muslim against Christian, Christian against Jew – to keep us all fighting so we can’t see the real shell game that’s going on.

Crime definitely pays – until you get caught – and that’s why people do it. There is a due date on it, so the odds are you’ll eventually run out of time, but you can get in and out. I wouldn’t advise it as a career choice. It’s not a safe occupation. But it pays, absolutely.

Of course, there are some criminals who never get caught. You’ve got criminals, whether they’re drug dealers, arms dealers, pharmaceutical companies or real-estate people. White-collar crime definitely pays. Especially the shit that’s legal.

AMERICA’S GUNS ARE HERE TO STAY

I don’t think that there’s a chance to remove them. There are thirty-something million guns in the United States, so it’s too late. It’s like if your house is filthy, what are you gonna do? Pick up a sock?

If there weren’t guns in the United States, I wouldn’t need any. But if everybody’s got ’em? Fuck that. If a motherfucker comes through my door, I’m not grabbing a butter knife. It’s like I say in the lyric of Civil War [from Body Count’s latest album Bloodlust]: if you come to shoot me, I’m shooting back. I don’t have to be the aggressor, but I’m not going to let you militia motherfuckers just run over some shit.

We’re in very strange times in the United States right now. Shit could pop off. And what are you going to do with all them guns? The problem with the United States is that they let things get real dirty and out of control, then they want to work out a simple answer. All they’ll do is have gun drives that’ll do nothing but give anti-gun people the false sense that they’re doing something. But they can’t do shit. It’s too late.

RAP AND METAL ARE TWO SIDES OF THE SAME COIN

Rap’s power is based on the power of the vocal delivery and lyric, while metal’s sound is usually based around hard guitars. When I think of modern metal, I don’t think of the vocal delivery. There’s some clean vocals, but there’s more of those Cookie Monster-type vocals. I’ve worked with Six Feet Under’s Chris Barnes, and I’m like: “What are you saying?” Death metal’s more of an energy, but I want to hear the words.

So when you take the aggression of the metal and really put some lyrics on it, you create a hybrid that’s rare. A lot of the people who listen to Body Count don’t even comment on the music. The guitars are there, but they’re not hearing them. They’re transfixed on the lyrics, which is a good thing.

While fans sometimes don’t see the similarities of the two cultures, musicians usually do. Fans are more polarised than artists. When we went out with Metallica, they were listening to NWA on their bus. I think artists spend a lot of time listening to other forms of music because they’re getting influence. When we went on Lollapalooza with Jane’s Addiction [’91], that was a big moment. Some fans didn’t get it, but now, especially in Europe, tours and festivals are more eclectic.

Dave Mustaine, Randy [Blythe] and Max [Cavalera] are all on the Body Count record. Which is a big statement, because they represent three different forms of metal, but are all on my record having a good time. Hopefully, now they’ve set that example, a lot of their fans will figure it’s okay to like Body Count and vice versa.

THE MOST ESSENTIAL THING A PIMP HAS TO KNOW ABOUT WOMEN

A woman is much slicker and far more methodical than a man. Though physically a man is more powerful, mentally a woman will fuck your head up [laughs].

When I first got into reading Iceberg Slim, I wanted to be a pimp. Then I realised: “This guy’s a writer. Instead of idolising what he does in the books, why don’t I try to write?” That’s when I started to rap. I didn’t think I could write, so I rapped in story format.

I was trying to exchange stories and experiences through my music, not rock the party or tell people to have fun and clap their hands. My rap albums were more like books than anything else.

DISCIPLINE CAN EITHER MAKE YOU OR BREAK YOU

I realised that most of the discipline they give you in the infantry is just head games. They’re trying to see if they can make you break, how much you’ll take and how well you’ll accept orders. Now I understand when I’m subordinate to somebody and when I’m the boss. The military got me ready for life, taught me how to take orders and to discipline personally. When I see people crying about bullshit, I’m like, toughen up, man, it’s not that serious. You really have to finish every mission, and I’m very mission-oriented.

WHATEVER THE GENRE, IF IT’S GOOD IT’S GOOD

When I mixed metal with rap by featuring Body Count on my OG album, my logic was that the audience would gravitate to anything that’s good. The music industry like to label things, they like to know what everything is. But to me it’s all just music, because everything is influenced by something else. The music industry’s very simple. It’s just a loan company that wants a return and they don’t give a fuck how they get it.

Hip-hop’s a vocal delivery, rap’s a vocal delivery, a way of telling stories. Country and western was already doing it but didn’t even know they were doing it. Also, if you’re not carrying a tune, you’re pretty much rapping. Rock groups were already doing it. Lou Reed was doing it, Bob Dylan, and eventually the street story had to be told. It just so happened that this music crossed the path of people like Schoolly D and myself, people deep into that game, so of course our music was going to reflect our lifestyles.

ACTING? RAPPING? THE GAME’S THE SAME

When I was first on set I used to be nervous, feel that someone would come over and say: “Can we get a real actor in here?” Now that I’ve been doing it for over thirty years, I think I’m getting the hang of it. At the end of the day, rapping, acting, becoming another character, putting you in another place, that’s what I do. That’s what I’ve always done. It’s all entertainment.”