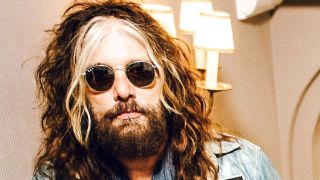 When Mötley Crüe issued their self-titled album in 1994, the band was facing a mighty uphill battle - original singer Vince Neil had been replaced by newcomer John Corabi, grunge and alt rock had made hair metal passé, and the band’s relationship with their label was about to turn sour. As a result, the album underperformed on the charts. But a funny thing has happened over the years - it has become re-appreciated and has developed a cult following amongst metalheads (some of whom rank it as one of the best Crüe studio albums).

And although Corabi only lasted for that one album and an EP (Quaternary) with the Crüe, he has forged a successful career as a solo artist, hired gun, and as a member of the Dead Daisies, who recently issued their first-ever concert album, Live & Louder. The band embark on a world tour this week, and to celebrate the occasion Corabi counted down his top life changing albums.

Again, my mom and stepmom had that one. That one really shows a band where all four guys are really firing on all cylinders. They had so many great records prior to that - Sgt. Pepper’s and all that other stuff. But you think about - there’s Come Together, Something, Oh! Darling… that’s just insane! Oh! Darling was one of the songs that made me want to sing. I loved the transition Paul McCartney uses between verse voice and then that bridge, where he kicks his voice into some weird overdrive. Again, primal. I was very young, thinking, “I don’t know what I’m listening to, but I’ve got these funny bumps on my arm hairs! I don’t know what’s happening here. But I want to do what this guy is doing.”

And it happened again on the second side, when he sang Golden Slumbers, because he did the same thing - it was verse voice, then it kicked into chorus voice, and it was that grit again. But I think the songwriting was amazing - that whole medley on side two was sick. It was unbelievable.

I just remember hearing this record as a kid, going, “This is band is awesome.” Hearing that as a kid, and trying to play Inside Looking Out and all that stuff - which I did in a bunch of school bands. But Mark Farner and Don Brewer: those two voices together, the songwriting, I just thought it was great. And as a side note, I seriously think that it is a crime against humanity that Grand Funk is not in the Rock and Roll Hall of Fame.

The Jimi Hendrix Experience - Are You Experienced? (1967)

My mom bought me that record for Christmas, with a few others. And I was just like, “What the fuck?!” I had no idea what was happening there. It was just insane - the guitar work, the songs, the whole bit. Hendrix was just on a whole other level that will never be explained. That was just insane.

That was my first introduction to Deep Purple. They had just come out with Smoke on the Water, so my mom bought me Machine Head, and I couldn’t put that record down. Ian Paice I think is one of the legendary drummers, Ritchie Blackmore, Roger Glover - who 30⁄45 years later, I’m friends with the guy! That whole record just blew me away. And who didn’t learn Smoke on the Water in their first cover band?

Zeppelin IV and Physical Graffiti are probably their greatest. I just remember hearing Misty Mountain Hop, and the riff for Black Dog was insane. Then I heard Stairway to Heaven, and that is a masterpiece. You can’t change one note of that song to make it any better.

Love the tunes. I know at times it’s a little dated - with some of the adlibs and whatever that they use. But vocally, those harmonies and the songs, that’s another band that sold like, a gazillion records, and I don’t believe they’re in the Rock and Roll Hall of Fame, either. It had Joy to the World and Pieces of April - it’s just a brilliant record.

Apparently, my mom wanted to buy me records because she knew I was into rock music, and she asked somebody and they said, “Get him the new Bowie record.” She bought it and had no idea what it sounded like, brought it home, and I was looking at the cover. I remember putting the music on and going, “Wow. This is different than anything that I have heard.” And then seeing photos of him, I was like, “I haven’t a clue what is happening here! All I know is I dig the shit out of what I’m hearing and what I’m seeing.” That was pretty intense, as well.

I heard Same Old Song and Dance, Train Kept-A-Rollin’ - which I played in pretty much every cover band I was ever in - and Pandora’s Box. Anybody that could make a verse out of “I ain’t what you’d call a city slicker or claim to fame to be a slitty licker,” I’m all over that shit! So, Tyler was God.

As far as something that really made me turn my head funny, I would have to say the Queen record, A Night at the Opera. You hear Bohemian Rhapsody for the first time and you go, “I don’t know what the singer is smoking, but this is genius on a whole other level.”

On a side note, if anybody gets the chance to see it, there is the series Classic Albums, and they do the A Night at the Opera record, and it’s broken down by Brian May, Roger Taylor, and Roy Thomas Baker. They go through pretty much every song, and one of them tells the story that Freddie Mercury took a vacation and went to Ibiza for a weekend, and then came home and handed them Bohemian Rhapsody completed. I’m like, “That’s musicality on a whole other level, and it’s just not fair.” And as a double asterisk, I can honestly say - without bragging - that I saw Queen five times with Freddie, back in the ‘70s, and it was just mind-blowing.