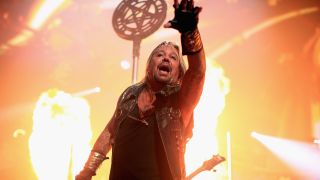 Vince Neil, 54, is the frontman for Mötley Crüe. During his 35-year recording career, he’s released eight studio albums with Mötley Crüe and three solo collections. He’s also been a vintner, produced his own tequila, launched his own poker tournament and opened his own tattoo shop in Las Vegas…

“I had been shooting coke for years before Mötley made it. People glamourise what Nikki and Tommy did, but I was right there with them. I was doing heroin. When we were playing clubs, the band made me stop shooting coke. I was a coke addict and I had some crazy shit going on. It’s just that I haven’t really talked about it.”

“I killed my best friend [Hanoi Rocks’ Razzle] in a car wreck when I was drunk. If he had been driving, I’d be dead. I didn’t really go to jail – times were different. If it happened now, I would be in prison. But that’s how the times were, you can’t avoid that. It was a stupid thing to do but it was one of those things where we were buddies out drinking, that’s about it. I tried [to straighten out] for a while afterwards but then I got back into the same old motions that I was doing before. The band was never supportive of me not drinking and doing drugs. They wanted me to do it, so it happened. I couldn’t get out of it.”

“It was tricky telling my wife that I was in a sex video. It was me, [porn star] Janine Lindemulder and this other girl just having fun. The other chick, I can’t even remember her name, she’s the one who went and sold the video [in 1999]. There’s nothing I can do. It’s out there. There was a lot of wine involved. Was it weird that it got leaked? Nah – when it came out, I didn’t want to do what other people do and talk about it. I just said, ‘Yeah, yeah, it’s out, whatever’. I wasn’t going to go, ‘I’m fighting this’ because the more you talk about it, the bigger it gets. If all I did was acknowledge it, then it would just go away and that’s what happened.”

“The ‘90s were hard. Putting out my solo record, the Exposed album [1993] was great. We went on a great tour opening for Van Halen. It was a humbling experience, but it was great. I was excited. I was happy. But when my daughter [Skylar] passed away [from cancer] it was a difficult time. I really tried to kill myself with drugs and alcohol for months just to try to deal with it. I probably went to three or four rehabs in a year.”

“Most people go to rehab just to dry out, not to actually stop drinking or doing drugs. Usually most people go there because they’re been given an ultimatum by their wife or boss. You’re not there for yourself; you’re there because someone wants you to be there. That’s why it doesn’t work. You have to go when you want to go. I don’t think you ever have it licked. But I haven’t thought about doing drugs in 15 years. I kind of cringe at the thought of it. That was for the old days. But I have a drink once in a while – it doesn’t hurt ya. The drugs were fun back in the day. Me, Nikki and Tommy lived in the same apartment and those were the drug days. Now? What’s the point? It would just ruin everything.”

Mötley Crüe are on tour now. The band will play their final show at Los Angeles’ Staples Center on December 31. For more details, click here.