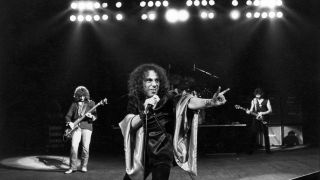 So what, if push comes to shove, is Black Sabbath’s greatest album? When this question was put to a number of Classic Rock writers, the votes were as follows:

So what, if push comes to shove, is Black Sabbath’s greatest album? When this question was put to a number of Classic Rock writers, the votes came in like this…

We also asked a few actual rock musicians. Joe Elliott said Sabbath Bloody Sabbath. Ginger Wildheart and Diamond Head’s Brian Tatler said Master Of Reality. The Darkness’ Justin Hawkins said “I like the one with the Oh No lyric, and the scary song with evil chords in it. I think it’s called Black Sabbath…”

There is an inarguable truth in this. The first six Sabbath albums, featuring Ozzy Osbourne, are what defined the band. Only a fool would dispute that.

But for this writer, the greatest Sabbath album is one that they made without Ozzy - Heaven And Hell. And while some Sabbath purists might consider this tantamount to heresy, there are two other Classic Rock writers, Dave Ling and Dom Lawson, who also rate Heaven And Hell above all other Sabbath albums.

Released on April 25, 1980, Heaven And Hell was the first album the band made after Ozzy was fired and replaced by Ronnie James Dio. And for Dio, the man widely regarded as the greatest heavy metal singer that ever lived, this album was his greatest achievement.

For many Sabbath fans, Ozzy was irreplaceable. But Dio had an unshakable belief in his own ability. He had proved during his time with Ritchie Blackmore’s Rainbow that he was a singer of immense power. And it is no exaggeration to say that he saved Black Sabbath.

The band had been in decline for five years before Ozzy was canned. Their last two albums of the 70s – Technical Ecstasy and Never Say Die! – were nowhere near as great as the first six. But with Dio, Sabbath were reborn.

His richly melodic voice and fantasy–themed lyrics added a new dimension to the band – something that was immediately apparent when they wrote their first song together, the epic Children Of The Sea. As Dio said: “I knew I could make them great again.”

Heaven And Hell features four stone-cold classic songs: Children Of The Sea, Neon Knights, Die Young and the monumental title track on which Tony Iommi played the best lead guitar of his entire career. And the other four tracks are almost as great – in particular, the grooving Lady Evil and the colossal end piece Lonely Is The Word.

Heaven And Hell is undeniably one of the all-time great heavy metal albums. And when Geezer Butler spoke to Classic Rock in 2013, he was unequivocal. “Heaven And Hell,” he said, “is as good as the first six albums.”

A personal note here: it was on Christmas Day 1980, eight months after the album was released, that I finally got to hear Heaven And Hell in its full glory for the first time. It was on cassette, a Christmas present from my brother. I was 14 at the time, and the money I had from my paper round wasn’t enough to buy all of the albums I wanted when they were first released. I got two albums that Christmas. The other one was Kiss Unmasked. That was great too. But Heaven And Hell was awesome. And it still is, all these years later.