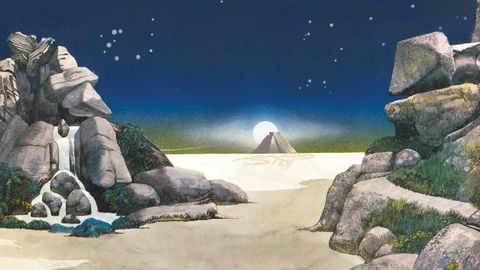 It’s one of the great – and grating – received wisdoms in the history of music. Yes’ sixth studio (double) album was – allegedly – the pretentious folly that demonstrated how far up their own jacksy the early-70s rock bands had gone: such indulgence required the short, sharp shock of punk to reboot the genre. This myth has been allowed to stand for decades, not least because Rick Wakeman is such a good sport that he’s taken the mick out of it himself. Lately, Steve Howe has been defending it, as the 90th line-up of Yes tour it live, while Jon Anderson has always perceived it as a fine, spiritual example of Yesmusic.

Your ears have been waiting all their lives for this moment.

The truth is that the first UK No 1 album of 1974 is inspired, ambitious and beautiful. It holds up today in many more dimensions than most one-trick-pony punk records, and has influenced much of the critically acclaimed music of most years since. You can hear within its high-pitched serenity and exploratory intensity glimmers of everything from Cocteau Twins to Mercury Rev. It’s well overdue a reappraisal. If idiot-of-the-people Tony Parsons slated it in 1977, that doesn’t mean you have to obey him in 2016.

Steven Wilson, of course, has known this for a while. To him, it’s their “pre-eminent masterpiece”. The latest in his series of re-sparkled Yes albums has been the most challenging (he worked on the new mix on and off for three years), but the most successful yet. His stereo and surround mixes here are joined by the original in its highest possible resolution, some teaser ‘single edits’ and, on the Blu-ray, instrumental mixes.

It’s usually Wilson’s clean use of separation that becomes the debated topic: does he tidy things up too much? Not here. From the glorious opening minutes, these fresh, reinvigorated Tales lure you in with their purity, then gut-punch you with their sheer solar-powered whoomph.

If the original had its waffling patches (though fewer than, say, the sainted Clash’s Sandinista), now it’s crystal clear what’s happening where. The solos and punctuations by Howe (in particular) and Wakeman really fly, Squire and White keep it moving with muscle and subtlety, and Anderson is, as ever, in his own authentically elevated zone. It’s still the case that ‘side 3’ is the least impressive (though better than generally credited), while ‘side 2’ sows the seeds of Relayer.

The first quarter, Dance Of The Dawn, is just 20 minutes of borderline-manic magic, and the fourth, Nous Sommes Du Soleil, brings it all home consummately. Your ears have been waiting all their lives for this moment.