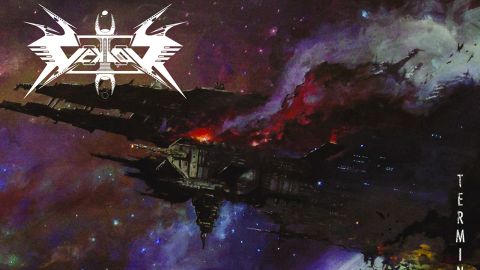 Taking inspiration from classic concept albums such as Queensrÿche’s Operation: Mindcrime and Fear Factory’s Demanufacture, Philly thrashers Vektor have set their sights on the stars for their mammoth third album Terminal Redux.

Telling the tale of a disgraced astronaut who discovers a life-rejuvenating molecule and ultimately ends up overthrowing a vast, galaxy-spanning empire while granting his newfound subjects eternal life along the way (as you do…), the music on their third album is every bit as epic as their sci-fi-based story.

Clocking in at a whopping 75 minutes (the first three tracks alone would fill an old-school thrash album), Terminal Redux is an adventure and a record that rewards and reveals subtle subplots with repeated spins. The super-tight, nine-minute Charging The Void sets the tone for what’s to come and is crammed with jaw-dropping, fret-based gymnastics, dazzling musical dexterity and a gospel choir, who give proceedings a Jesus Christ Superstar meets technical metal vibe. Collapse and Recharging The Void sees the debut of clean vocals from frontman David DiSanto and his tones, somewhere between Chuck Billy and Dave Gilmour, add an exciting new dimension to Vektor’s sound.