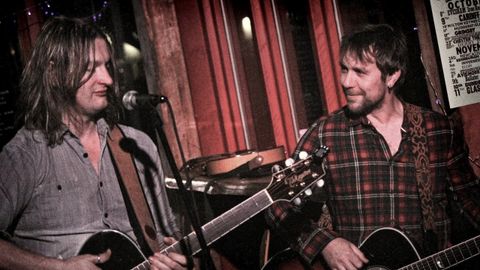 Almost thirty years ago, with an acoustic on his lap in his mother's front room, Tony Wright began a musical adventure which took him to the dizzy heights the top ten, regular appearances on Top of the Pops, main stage slots at the world's biggest festivals, and massive records with party rockers Terrorvision.

Three decades later, Wright has his trusty acoustic slung over his shoulder once again, as he starts a much anticipated solo tour.

Stopping in for a packed show at Stornoway’s Woodlands Centre on the sleepy Isle of Lewis off Scotland’s west coast, the likeable Yorkshireman takes to the stage with a grin as wide as the Minch. Perched on a stool in the corner of the Woodlands that normally operates as a cafe, ably supported by Milton Evans, he’s armed with an arsenal of classic Terrorvison hits and backed up by tracks from his brand new Thoughts N’ All album.

Despite being stripped-back, the songs still deliver a punch, and the Terrorvision tunes prove themselves to be more than unashamed party anthems: down to the bare bones, the songs take on a whole new meaning, Wright’s passionate delivery infusing them with a newfound joy.

Wright’s journey — from outside the musical industry, with his Top of The Pops-era well behind him, to a new solo record funded by his own fans — is perfectly captured in the set. The lyrics of Day After Day feel more meaningful than on the plugged-in original: the song is beautiful, painful and heart-wrenching, sometimes all at once. “And I just want to lose grip… but you’re just too busy being wonderful,” he sings, almost wincing at the memories left by the taste of the words in his mouth.

New tracks like Little Things and Roll Over fit perfectly with old staples like Babylon and Friends and Family. Played in their new style, the Terrorvision classics become odes to friendship, good times and even love. The radio-friendly Perseverance generates a purr of approval and a raucous singalong before Tequila brings the curtain down on a wondrous set

Tequila is both Terrovision’s biggest hit, but Wright reinvents his most famous track here, stripping back the volume and mania of the original to put an entirely different – and unexpected — spin on it. “I woke up in the morning and felt like a Zombie, the Tequila Gold Label had bombed me. You see I woke up late and wasn’t feelin’ so great,” sings Wright, but you wouldn’t know it unless you were fluent in Spanish. That’s right – the boys from Bradford have slowed the track down and translated the lyrics.

The only thing missing from the night would be an acoustic version of Terrovision classic Middleman, but Wright says they couldn’t do it justice without a piano.

Welcome back Mr Wright — it’s been too long.