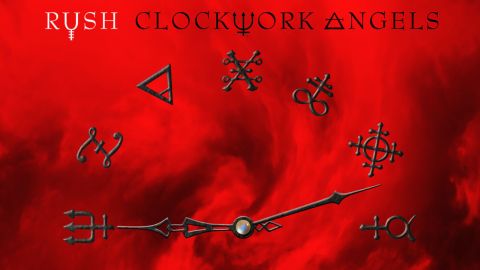 For a band whose US album sales are right up there with the Beatles and the Stones, Rush keep a pretty low profile. But in just the past decade, their mainstream status has noticeably shifted. Watching them on The Colbert Report recently – playing Tom Sawyer on Guitar Hero and losing, badly – you realise just how deeply they’ve been absorbed by popular culture. It’s an affection reserved for only a handful of enduring rock bands (AC/DC comes to mind), those who can only really be divided by themselves and one. Forty years in, Rush are reaping the rewards for being themselves.

And with this cultural rebirth, a creative one. 2007’s Snakes & Arrows was a convincing musical statement, with new producer Nick Raskulinecz encouraging the band to take chances and reconnect with their essence as a progressive rock band. And what better way to seal the deal than to follow that up with their first full concept album.

Neil Peart’s story for Clockwork Angels percolates through many literary seams, notably steampunk. Filtered through the Victorian fiction of HG Wells and Jules Verne, this idea of ‘a future as seen from the past’, is championed by current writers including Peart’s friend, Kevin J Anderson. On Rush’s 20th album this is used, as the drummer puts it, to “tell a story set in an alternate timeline, with alchemy, clockwork, and steampunkery”. So we follow a character on a quest through an antique sci-fi world teeming with pirates, anarchists, explorers and carnival dwellers. It’s a heady theme, and Rush crank up their nonpareil power trio smarts to set it to some of their toughest music.

Caravan sets a swaggering, funky tone. ‘I can’t stop thinking big,’ sings Geddy Lee, establishing the character and the world ‘lit only by fire’. Alex Lifeson’s swathes of crunchy tone and a blues-drenched solo back this up. Hewn from the type of riff Muse would kill for, BU2B sets the story on a cosmological scale, its hard, hyperactive groove leading to the title track, which floats in on exotic tones and shimmering clean guitars before bursting into life.

Partly inspired by Joseph Conrad’s The Secret Agent, The Anarchist is a musical cudgel, driven by a fierce bass melody, judicious strings and adorned with Eastern instruments. There’s a hint of Working Man to Lifeson’s riff for Carnies, the sound of Rush on all cylinders. The gorgeous lull of Halo Effect is a welcome respite – rich acoustic guitars complemented by subtle strings in a deepening arrangement.

This is a thoroughly modern record but, as ever, Peart’s ear for the mythic adds Xanadu-like grandeur to the music. Seven Cities Of Gold was inspired by tales of Spanish conquistadors, and it’s a monolithic, shifting rocker that heralds the character’s entry into the belly of the beast, El Dorado. Blessed with beautiful clean lines and a refrain that ‘Sometimes you have to be wary of the miracle too good to be true’, The Wreckers is accessible, with a light, major-key simplicity (not bad for a song inspired by pirates who deliberately ran ships aground). Headlong Flight is Rush at their most exhilarating. ‘I wish that I could do it all again,’ sings Lee, punctuating the maelstrom. His vocals have rarely been this mellifluous and consistent, but here he hits a high note that jars on first listen, and is catchy as hell by the third. Peart’s rolls here are incredible, and Lifeson’s wah-wah solo just primal.

Taking a breath with the catchy Wish Them Well, they leave the best for last. The Garden is a brilliant closer, its titular metaphor for pragmatism and resignation borrowed from Voltaire’s enlightenment classic, Candide. ‘The treasure of life is a measure of love and respect,’ sings Lee. ‘So hard to earn so easily burned’. The line’s delivered with throat-catching candour – the writer’s own trials add an emotional resonance perhaps – while Lifeson’s elaboration on the melody is just beautiful.

Marvel at Clockwork Angels for one or all of its many levels: its literary depth and steampunk cool; its creators’ unity of purpose and preternatural musical sense; its lip-curling rock grooves and girthy production. Whatever Raskulinescz is doing, it’s working. In the blue sky of this creative Indian summer and with that cultural tailwind behind them, Rush channel the impulse that made them so special all along on a modern progressive album right up there in their canon. After 40 years in a world lit only by lighters, there’s no sign they’re headed for that garden any time soon.