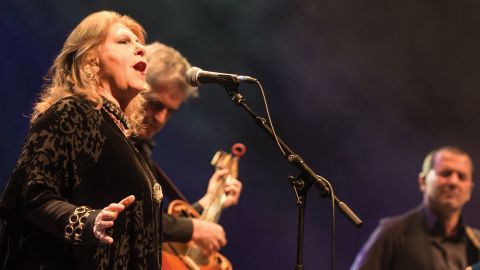 The Forum is extremely sparsely populated for this art-folk double-header, but Sonja Kristina isn’t holding back. With flaming locks of auburn hair and ivory skin, the Curved Air siren looks every inch the prog goddess, prowling the stage with all the theatrical extravagance of a skilled mime navigating her way through imaginary reeds.

Making her entrance after the opening instrumental Spider (from 2014’s comeback album North Star), she’s very much the centre of attention, although the fragility of songs like Melinda (More Or Less) tends to expose the frailty of her voice, which also seems to struggle to keep up with the more upbeat Purple Speed Queen. As it is, the highlights come from less expected quarters: Kirby Gregory’s wah-wah driven guitar solo on Interplay is a soaring, spectacular success, and it all comes together at the end on Back Street Luv’s greasy, sinister riff. Sonja’s enthusiasm is infectious throughout, however, and within two minutes of the set’s climax she’s at the back of the hall manning the merchandise stall, hustling CDs. And signing torsos, possibly.

The years have been much kinder to Annie Haslam’s vocals, and Renaissance’s opener, the racing, Sergio Mendes versus Jesus Christ Superstar jazz-lite of Prologue, lifts the atmosphere several notches. They play a set that mixes old and new with seamless aplomb, from 1972’s epic Sounds Of The Sea to a trio of tracks from 2013’s Grandine il Vento. Highlights include 2010’s Immortal Beloved, which sounds like early Kate Bush, to an ambitious, eloquent rendering of Symphony Of Light, full of pomp and theatricality. Throughout, it’s the heftier, more dramatic songs that stand out. While 1978’s unexpected hit single Northern Lights feels like a reluctantly performed chore — and is greeted as such by many in the audience — the set swells to a triumphant finale with the epic sweep of Mother Russia, from 1974’s Turn Of The Cards, and makes you wonder why no-one’s yet turned David Lean’s Doctor Zhivago movie into a West End musical. One steppe at a time, perhaps!

“The 70s were great!” says Annie at one point, before admitting that the band had lost their way in the following decade — pointing out the denim jacket she wore on the cover of 1983’s Time-Line as compelling evidence — so it’s no surprise when the evening returns to 1978 and ends with an uplifting, elegiac version of A Song For All Seasons.

It all finishes with both bands on stage, Annie and Sonja arm-in-arm, as thanks to the crew are offered and bows taken. “What about thanking us for coming?”, shouts one wag, perhaps missing the point that, by and large, we didn’t.