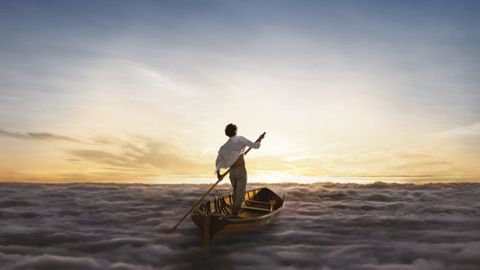 The opening words you hear on The Endless River are slightly hesitant. Clipped. Terribly English.

Even if you didn’t know this was the voice of late Pink Floyd keyboard player Rick Wright, such is the aura of the man and his sound that pervades this album, you’d probably guess.

‘There’s a lot of things unsaid,’ adds a more abrupt David Gilmour. ‘We shout and argue like everyone else.’ The ever-avuncular Nick Mason offers some mitigating words, and then we’re off into the music.

And what music it is. The internet’s been awash with rumour and conjecture since the announcement that there would be one last Pink Floyd album: ‘It’ll be The Big Spliff!’ ‘It’ll just be another variant on 90s Floyd, with extra musicians brought in to mask the inadequacies.’ ‘Maybe it’ll just be Soundscape, the bonus track that came with 1995’s Pulse live cassette’, et cetera ad nauseam…

The Endless River is none of these. It is so much more. It is a tribute to the departed Wright and the swansong of one of the greatest progressive acts of our time. It is also an album that goes some way to recapturing the pioneering, exploratory spirit that made Floyd such a potent force to begin with.

If you’re a prog rock fan who likes Pink Floyd, then The Endless River is to a certain extent the Floyd album you’ve been waiting for, the one you never thought you’d hear the likes of again.

It comprises four lengthy instrumental pieces, created largely by just David Gilmour, Nick Mason and Rick Wright (Guy Pratt has added some bass and Gilad Atzmon some tenor sax) as they jammed at Britannia Row Studios throughout ’93, preparing what would become The Division Bell.

Those jams saw the band seeking to reconnect with what had made them such a powerhouse, and wigging out as only they could. The results have been reworked in the studio (take a bow producers Andy Jackson, Phil Manzanera and Youth) into something aurally sensational. This album evokes treasured moments in the band’s history as Shine On You Crazy Diamond, Echoes, The Wall and even A Saucerful Of Secrets, yet with the sonic impact today’s technology can bring.

Although sub-sections of the four suites have been named, the four main movements have not. It’s a largely redundant gesture anyway, because as Gilmour enjoins elsewhere in this issue: “Listen to the whole thing, the whole piece, all the way through.”

Once past the soundclips of the main protagonists, Wright’s keyboards float in, building momentously before Gilmour’s guitar drifts in, followed by Mason’s heavy-set, loose drums. It’s a languid, carefree groove that slowly develops into something akin to a bluesier Shine On… as the three lock together. And then it suddenly lurches, twisting away in a manner that sonically seems to reflect Scarfe’s Wall animations, toying with familiar motifs before drifting off into an ambient space.

Likewise, Side Two opens with Wright’s throbbing keys, yet here an opening more akin to modern Floyd soon evolves into an altogether heavier vibe. The spirit of Echoes rises up as Gilmour’s guitar builds, yet this is altogether more urgent with more tribal beats from Mason, with Wright acting almost like some kind of washer between the two, before Atzmon’s sax brings things to Side Three.

This is truly the centre point of the work. Jazzy Wright keys and Gilmour’s building guitar lines explode into a Wall-esque groove that then allows Wright’s sensational 1968 Albert Hall organ to rise triumphant, before all three unite in the heaviest music on offer (instrumental maybe, but never ambient) before again the mood changes, easing down, the familiar voice of Stephen Hawking intoning: ‘Speech has allowed us the communication of ideas.’ The sweet irony of the band who communicated through their music, but couldn’t talk to each other, and barely anyone else for that matter.

Side Four opens with spacious and spacey sounds, drums and guitar interlocking as Wright floats over them. Yet this time something feels familiar, as the most obvious latter-day epic Floyd sound builds. And then, a recognisable tolling of church bells, some acoustic guitar, and we’re there – the song.

‘We bitch and we fight/Diss each other on sight/This thing we do,’ Gilmour sings, later noting, ‘With world weary grace/we’ve taken our place,’ before ending with: ‘The sum of our parts/The beat of our hearts/It’s louder than words.’ And the three musicians lock together, upwards, soaring and heartfelt. And then… they’re gone.

This isn’t just Pink Floyd honouring their fallen comrade. They’re also taking stock of their career, looking back fondly and admitting both triumphs and mistakes. It is a quite wonderful, strangely moving culmination of the career of one of rock music’s all-time great bands. Celebrating together for one final time before walking through the studio door and, maybe with one glance over their shoulders, closing that door tightly shut.