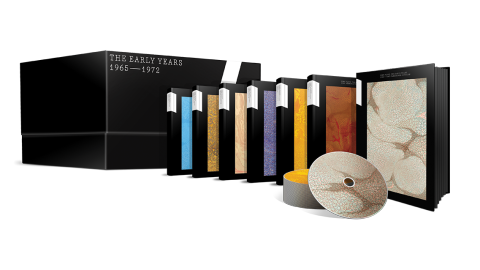 Before the fanfare heralding this gargantuan boxed set had even died away the hardcore complaining began. “Not comprehensive enough!” “Where’s the super-8 footage of Syd cleaning his teeth!?” “Why no 2016 5.1 mix of Echoes?”, and, loudest of all, “How fucking much?” Regardless of the validity of some or all of these objections, it cannot be denied that these 27 discs with over 25 hours of audio and visual material and associated flummeries, present a sumptuous feast for the serious Floyd fan to get stuck into.

Listening to the group gets to grips with who they are and who they want to become – examining the beginnings of the one-time underground band who conquered the mainstream, establishing the framework for stadium rock spectacle along the way – builds with a satisfying momentum. By no means the first nicely-spoken, middle class boys to be enamoured by the blues, they were perhaps, in Britain at least, the first to take them into orbit. As Barrett’s idiosyncratic songwriting gradually leaves the garden of earthly delights behind and tilts skywards things become delightfully skewed.

Moving through the boxset reminds us how utterly crucial Rick Wright’s keyboards are to their success, and with Gilmour on board from 1968 onwards, things truly take off – albeit in a languid kind of way, as Floyd eagerly dabble with sound and form. Eccentric, eclectic and electric, suites like The Man and The Journey weren’t simply utilising light shows and pre-recorded soundtracks as a jolly jape. Converging with other multimedia experiments in dance, cinema, literature, painting and other disciplines beyond, they were seeking to conceptually jolt the standard rock concert experience.

Other highlights scattered across the sets include vivid radio performances that often surpass their album counterparts; revelatory remixes that add new, intense and startling colours to psychedelic classics like Paintbox, Matilda Mother and Jugband Blues; the legendary Moonhead from the television coverage of the moon landing; an early shiver-inducing work-out of Echoes. There are so many other examples, too many to list here. And in a way, that’s the point and the benefit of these lavish, labyrinthine undertakings isn’t it? Set your controls for the heart of the box.