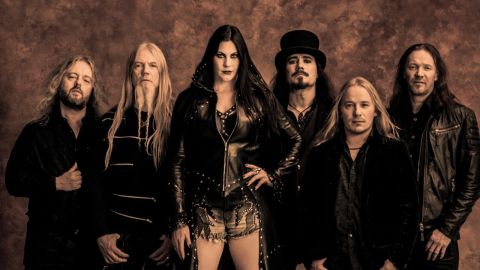 Just when you think you know Nightwish, they go and do something that leaves you with a lingering “Huh?” By their very nature, their music has always been designed to challenge the metal status quo, whether it be through the progressive nuances of their Celtic influences or by injecting startling measures of bombast that reached fever pitch on the release of their last album, Imaginaerum.

And as life imitates their art, their hirings and firings have been equally dramatic, first with an open-letter dismissal of Tarja Turunen and then, and perhaps more surprisingly considering the success and plaudits afforded to their magnificent last offering, an unceremonious split from Anette Olzon.

In 2015 things are no different. While the fact that ReVamp and former After Forever singer Floor Jansen has replaced Anette might require us to readjust, news of their new recruit is somewhat eclipsed by their choice to eschew fantastic tales in favour of natural biology, with the inclusion of spoken-word sections by geneticist and staunch atheist Professor Richard Dawkins./o:p

Led by the band’s brainchild Tuomas Holopainen, the choice to base the concept around the evolutionary history of the world makes perfect sense from a sonic viewpoint. After all, if you’re going to have a band interpret such mind-expanding ideas as the history of life, it might as well be one who has a better grasp on embodying a sense of epic than anyone else.

Beginning with Shudder Before The Beautiful, we are met by a moment of unadulterated metallic rhetoric. ‘The unknown, the grand show, the choir of the stars,’ chimes Floor on a chorus that rides above the crashing waves of symphonic bravado and that is matched in weight by the massive shredding section providing its climax.

The sonic upheaval continues through Weak Fantasy, with its death metal-esque intro, bursting like a nuclear explosion in a wash of operatic theatrics and a mass of strings and brass and woodwind and charging triumphant through melodies that, interestingly, hint at Queensrÿche’s metallic assault.

Yet for all for all its initial bombast, the rest of Endless Forms Most Beautiful is less immediate. After the bluster settles, their eighth studio album takes on a more placid, progressive form accentuated by the Celtic flourishes from Troy Donockley, now a full-time member. In these humble moments Floor’s voice is exposed and she delivers her words with lush, confident phrasing and a sensitive treatment of the story of evolution.

The album’s closer, a 24-minute opus named The Greatest Show On Earth, is the defining moment, and the point at which Richard Dawkins makes his appearance by way of several arresting monologues.

“We are going to die and that makes us the lucky ones,” he utters as the exhilarating histrionics fade out to the sound of whale song, and the album concludes its exhaustive tale of origin that upholds Nightwish’s legacy of being the masters of bombast on this, their newest and most challenging chapter.

WHAT WAS THE CONCEPT?

“Imaginaerum was a tribute and praise to imagination and its power, but Endless Forms Most Beautiful is tribute and praise to the real world: reality and science. I’m a huge fan of Darwin and I found Richard Dawkins and Carl Sagan a few years ago. I felt this was the time to do an album about those themes.”

DID YOU FEEL LESS OF A NEED TO EXPLORE FANTASTICAL THEMES?

“For the past few years, I’ve been heavily immersed in science. I had this strong urge to let out all the beautiful stuff that I’ve read.”

**TO WHAT EXTENT WOULD YOU SAY THE REAL WORLD HAS BECOME MORE INTERESTING? **

“Carl Sagan put it well: ‘Imagination will often take us to places that never were, but without imagination we go nowhere.’”/o:p