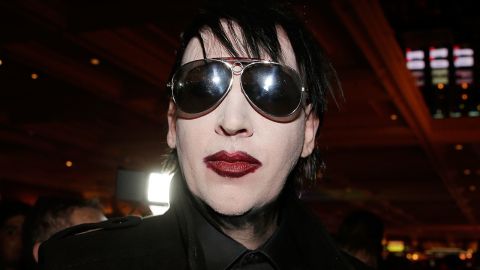 For Halloween the God Of Fuck took to The Roxy on The Sunset Strip for a special, intimate show. But could he deliver the tricks as well as treats?

This Is A Manson Show Unike Any Other

Forget any tricks, this Halloween show at The Roxy is a real treat. The Sunset Strip venue has a maximum capacity of just 449 people, which tonight will be 80% filled with Mazza’s family and friends including multi-platinum US artists MTKO and international model and face of Burberry, Cara Delevigne (who is tonight dressed as a really hot Mario). There will be no stilts because the venue is so tiny, it just couldn’t fit them in. Same deal for any podiums, pyro or props. In this intimate setting, all you need is the man and his music. The stage is set but after a decade of false starts, is this the start of a Manson rebirth?

It Bloody Well Might Be The Start Of A Rebirth

Tonight is the best Manson show in a decade. No baloney, no talking it up just because he’s back for another album cycle; this is a 13 song reminder that Marilyn Manson is one of the most visionary and outright brilliant artists to ever hit heavy music. The hits are played with vigor and a vicious streak that has long been missing. That famous roar that makes tits and testicle hairs stand on end is full-throated and primal again. This Is The New Shit, mObscene, The Dope Show, Rock Is Dead, Disposable Teens… the list goes on. Best of all though…

There have been plenty of big songs over the past few records (the fact that No Reflection from Born Villain is a highlight tonight tells it’s own story) but sultry and sinister set opener Deep Six and the dirty grind of Day Three Of A Seven Day Binge sound huge. We’re yet to hear the new record but if this is anything to go by, sex and danger seep and ooze all over these two bangers-in-waiting and the equally impressive Cupid Carries A Gun. They’re not moments to go to the bar and wait for the big hitters, they’re genuine highlights of the set.

It’s exciting to see tonight’s host clearly having fun up there. The glint of Abaddon burns from his eyes, there’s wise cracking between songs in that iconic gothic drawl and he looks like he’s having a blast. Get the magic Men In Black stick out and the energy and unrestrained nature of how he attacks each song tonight is enough to make you forget some of the car crash performances of recent years.

Yeah, the desperate clamor to get smartphone pics of Johnny Depp and Ninja from Die Antwood is a little OTT and may grab the headlines (it’s the most ramshackle and chaotic The Beautiful People ever but it’s fun because Jack Sparrow) but make no mistake about it, this is Manson’s night. From something as simplistic as the way he lurches over the audience, spotlight in hand, during a menacing Sweet Dreams and the unadulterated delirium from the hardcore that greets Antichrist Superstar rarity Mister Superstar, it’s impossible to leave the venue not feeling like Manson could be back in the game in the biggest of ways. Tonight isn’t about spectacle and challenging the live shows of the glory year. This was supposed to just be a show for friends and family but it feels like something much, much bigger. It feels like the start of a renaissance. It’s early days but if he can capitalise upon this incredible starting point, Manson is as back as back can be.