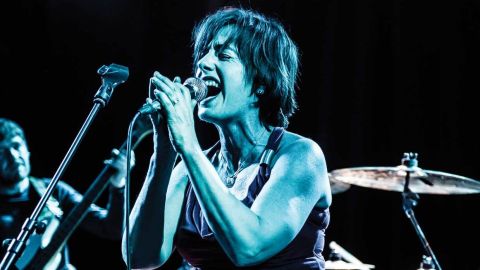 After several years building a reputation as a solo artist with acoustic support slots, Alan Reed is back fronting a full electric band. Kingdom Of The Blind is a tentative opener, but My Sunlit Room and Razor from new album Honey On The Razor’s Edge see the Glaswegian throwing rockstar shapes like a born performer. His energy is infectious too, as guitarist Mark Spencer joins in on the act brandishing his instrument like a claymore.

Reed is relishing the power and volume behind him, and matching them with an impassioned vocal performance of the Holocaust memorial Sanctuary from his Pallas days. Another new song, Used To Be Someone, changes the energy in the room from rock bombast to a more reflective mood. It’s no less excellent for that. Plaintive e-bow lines cry and bass pedals underpin Reed’s version of a power ballad. The Pallas epic Crown Of Thorns sees Alan fist-pumping and posing to phone cameras. It’s great to see a band enjoying themselves this much, and that energy is returned by the room, showing appreciation for a hugely entertaining set.

The symphonic intro to Trojan from new album We Are Legend is a classy statement of intent. Recalling the cinematic aural vistas of Vangelis’ Blade Runner score, it soon explodes with long sustained guitar notes and a jump-along riff that is sure to become a mainstay of future shows. Tonight we get only an excerpt from the 25-minute-plus behemoth, but opening with 10 minutes of previously unheard music is a bold move, and the receptive fans are rewarded with a string of tried-and-tested favourites.

Speechless and the cha-cha-cha of Gluttony breed an air of familiarity. Griffiths slots in admirably to his role as timekeeper, while Fry, meanwhile, flits moth-like between electric and acoustic guitars, bringing Gluttony home with some searing slide work.

The Janis Joplin tribute Pearl and a paean to Vincent Van Gogh in new track Colours give singer Christina Booth a superb chance to shine, injecting soul and genuine emotion into these tales of artistic tragedy. Fry’s fiery blues leads are a perfect foil to Booth’s heartfelt elegies, and they reach new heights on the Robert Johnson-inspired epic The Devil At The Crossroads.

The obligatory energy-giving banana ritual (don’t ask) leads into an encore of The Lizard King and Pride. Songs old and new rubbed shoulders tonight. Judging by their reception, Magenta’s latest offerings are set to become the stuff of legend.