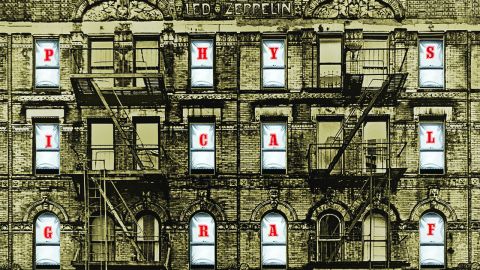 As Led Zeppelin wrapped up their 1973 US tour, cracks had begun rippling through the band’s foundation.

In view of their Machiavellian campaign over the past four years, this was not entirely surprising. Consider that Led Zeppelin released their first five albums – all platinum sellers – and toured the States nine spine-crumbling times between 1969 and 1973. Sure, they were the biggest band on the planet, but the costs of their aspirations were now playing out in the deadening emotional fatigue that inexorably follows such heroic touring. Moreover, the proggy gyrations and obtuse lyricism of their fifth album, Houses Of The Holy, had confounded many fans and fuelled the scorn of petty critics all too ready to write off the band’s posturing as pseudo-cerebral cock rock.

After a brief hiatus, Zeppelin regrouped in the spring of 1974 and convened at a remote estate in Headley Grange, where they dove headlong into a verdant songwriting frenzy that would yield their enduring masterpiece – the utterly enthralling Physical Graffiti. Clocking in at nearly an hour, the new material was so provocative, diverse and at times bludgeoningly heavy that rather than prune off a single track to fit onto one 40-minute album, they reworked unused tunes from their previous three records and released Physical Graffiti as a double album. Cocky? Absolutely, and yet as Jimmy Page – who also produced the record – would correctly point out years later, they were the only band who could successfully pull off something so grandiose.

From the sizzling labyrinthine funk of opener Custard Pie to the dizzying tempo changes of In My Time Of Dying, it was clear that along with their battering mastery of electric blues, Zeppelin had broadened their outlook considerably. Forays into elegant acoustics (Bron-Yr-Aur), California country rock (Down By The Seaside) and roof-busting Dixieland blues (Boogie With Stu) fixed Zeppelin’s ambitions far beyond amped-up Elmore James worship. The apex was Kashmir, that mesmerising Middle-Eastern paean to heaviness, powered by Bonzo’s hypnotic Levee-esque stomp and a sweeping orchestral backsplash. Belters like The Wanton Song and The Rover removed any doubt that the band might have lost their way after Houses Of The Holy, while meat’n’potatoes rockers like Houses Of The Holy and Sick Again tapped into the abandon of Zeppelin’s earliest influences.

Newly remastered by Page, repackaged in a jaw-dropping panoply of CD, vinyl and digital formats and augmented with seven previously unreleased bonus tracks, the Physical Graffiti reissue sounds as vital as the day it dropped. Somehow Page has coaxed even more potency from the original tracks, with speaker-blowing updates of Trampled Underfoot, In My Time Of Dying and Kashmir that illuminate the subtleties of the originals. The newly released tracks – demos mostly – are anything but lo-fi jam filler. All seven are wholly absorbing, particularly the eight-minute orchestra rough mix called Driving Through Kashmir and a monstrous demo of Trampled Underfoot called Brandy & Coke. A thoroughly exhilarating overhaul of what many view as the greatest double album of all time.

PHYSICAL GRAFFITI IS SUCH AN ENIGMATIC TITLE…

“Absolutely. People have their own interpretations of it. Really, that title is further reflection of what the music is – because there are whole areas in there where you can have your own pictures in your mind and conclusions of what things are and what they mean. That’s something that was definitely alive and well in albums in those days.”

AS A DOUBLE ALBUM, IS PHYSICAL GRAFFITI THE PERFECT ILLUSTRATION OF THE BREADTH AND DEPTH OF ZEPPELIN’S MUSIC?

“Yes, because it gives all the different colours and textures. Like all of our albums, it was important that it was exactly how it was.”

AND A FEW OF THE SONGS WERE WRITTEN AT BRON-YR-AUR, A REMOTE COTTAGE IN THE WELSH HILLS.

“That was a place that Robert [Plant] and I would go to. It was peaceful, the landscape was astonishing. We’d have our guitars and just play. It was a reflective situation.”

WAS IT ALSO A BIT ROUGH AND READY THERE?

“At that time, yeah. It had no electricity. There were gas lamps and wood fires. But that was sort of hand in hand with what was going on with us at the time, ha ha ha!”

FOR MANY ZEPPELIN FANS, AND MANY MUSICIANS, PHYSICAL GRAFFITI IS THE BAND’S GREATEST ALBUM.

“That’s the perfect compliment. The fact that it’s an inspiration to other musicians – not just my playing but the whole of Led Zeppelin, collectively – that’s fantastic. It’s a great feeling.”