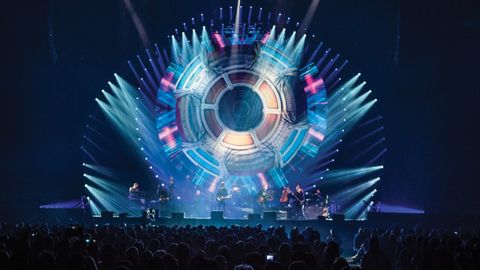 Over recent years, there’s been the ever-present aura of ELO being everyone’s guilty secret. It’s tricky to determine exactly why even the mere mention of their name should receive condescending smirks and mocking comments from those who view themselves as somehow above the intelligent pop that Jeff Lynne has created. Perhaps it’s jealousy at their album sales, an inaccurate allegation of Beatles plagiarism, or the fact that Lynne’s mass of curly hair complete with trademark shades has remained, despite the vagaries of fashion. Either way, that crass ‘uncool’ tag has stuck, and it therefore comes as a shock that Jeff Lynne’s ELO have comfortably sold out this 21,000 capacity arena. Everything does, it appears, eventually come full circle.

A feverish roar accompanies the dimming of the house lights, the darkness extending before a solitary spotlight illuminates the identifiable figure of Lynne himself. Rather like the music, he’s matured gracefully and looks the same as the last time he fronted any meaningful, live version of ELO some 30 years ago. Launching into Tightrope, the stage is illuminated to reveal a dozen members of the band – like Lynne all dressed in black – which offsets the dazzling, multicoloured projections on the enormous screen.

They’re a ludicrously talented bunch, with long term co-conspirator Richard Tandy having the look of a clergyman who has been grabbed from the cathedral next door. Bassist Lee Pomeroy is a recognisable presence from his work with It Bites, with a string section and additional keyboards providing lush orchestration to familiar songs. Evil Woman and Showdown are impeccably performed, with the faultless sound quality that you’d expect from a producer as accomplished as Lynne. Such precision is however lacking from some of the apparently contagious dad dancing that spreads throughout the venue during All Over The World, but given the evening’s infectious celebratory atmosphere, it’s all entirely forgivable.

A gaggle of women are shrieking in
a manner reminiscent of When
Harry Met Sally.

This is not merely an evening of nostalgia. There may be recognisable songs from the distant past, but Lynne demonstrates his talent hasn’t waned by adding material from their latest release. When I Was A Boy is an aching ballad that fits seamlessly into a set crammed with masterworks, Ain’t It A Drag possesses the neat, chugging melodies that permeated Lynne’s work with The Traveling Wilburys and When The Night Comes has a welcome sense of modernity. However, it’s the hits that most are here to witness. During Turn To Stone a gaggle of women are shrieking in a manner reminiscent of When Harry Met Sally; a similar reaction for Don’t Bring Me Down, Sweet Talkin’ Woman and Mr Blue Sky.

To be critical, more spontaneity would add warmth to the performance, and Lynne’s shyness wrongly gives an impression of aloofness. But essentially this is a masterful presentation of timeless music which proves that street cred has no place in music.