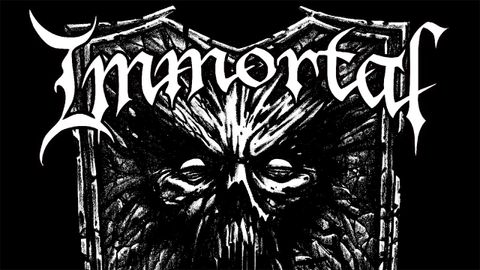 Following a comeback album with a comeback album – it’s a bit of a shitter, but it’s what Immortal were tasked with when guitarist, frontman and living meme Abbath left in 2015. He was more than just the band’s badger-faced spokesperson; he was the engine room, conjuring the majority of Immortal’s black metal brilliance since guitarist and lyricist Demonaz left the riff department in 1997, riddled with brutal tendonitis and unable to play. But now, patched up thanks to a shoulder operation, Demonaz is back on the axe and, somewhat appropriately, behind the mic. The frozen kingdom of Blashyrkh, the daemonic domain detailed in Immortal’s lyrics, is finally inhabited, explored and fleshed out by its creator.

And it’s gleefully grim. Nine years have passed since reunion record All Shall Fall, and it’s clear that Immortal got sick of waiting. As the title track opens proceedings, pummelling onward with Horgh’s arse-ripping percussion, Demonaz’s narratives spew forth seamlessly. Although operating in a similar, croaky register to his predecessor, this is no second-rate imitation job; Where Mountains Rise’s entire vocal track is among the catchiest Immortal have ever conceived.

As for the music on the whole? Immortal are still the sons of northern darkness, the undisputed kings of icy black metal. Yeah, the lack of Abbath’s guitar proffers a slightly less textured experience tonally, but that doesn’t hinder the band at all. Instead leaning primarily on the feral, speed-orientated riffing of Immortal’s earlier material, Northern Chaos Gods ensnares that youthful barbarism and chucks it into the grandiose, grimmer-than-thou templates previously explored on At The Heart Of Winter and All Shall Fall.

For every relentless assault like Blacker Of Worlds, you’re dealt the majestic, clean guitar passages within Gates To Blashyrkh and Mighty Ravendark, the latter closing the record in regal fashion. Northern Chaos Gods is more than just a callous display of premier black metal. It’s a frostbitten ‘fuck you’ to anyone who said that Immortal were finished.