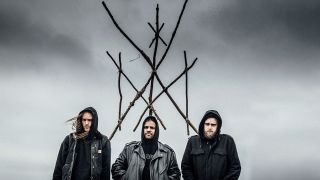 Belgian black metallers Wiegedood are releasing their new album De Doden Hebben Het Goed III on April 20, and it's a breathtaking journey through despair, anguish and pain through the sonic iris of extreme metal. Scathing yet expansive black metal soundscapes swell and expand to Godzilla-like size, all while keeping the intensity turned up to maximum.

But what inspired these Church Of Ra members to create such a magnificent racket? We asked Wiegedood guitarist Levy Seynaeve to pick the ten essential black metal albums for fans of all things heavy.

"The perfect representation of the chaotic side of black metal. There's nothing better than a ten-song album with nothing but blast beats and war samples to get your point across."

Dissection – Storm Of The Light’s Bane

"A melodic black metal band that doesn’t lose power by throwing too many unnecessary details in the mix. They stick to the instrumentation they have and it just accentuates how good the riffs actually are – and how tight they play together."

"Maybe not their biggest classic but it's definitely my personal favourite. I don’t think there’s anything left that still needs to be said about Darkthrone."

Emperor – Anthems To The Welkin At Dusk

"A record written by a man with a clear vision of what he wanted to create. I still discover hidden melodies I that hadn’t heard when I listened before. I’m usually not a big fan of theatricalities and such drama, but with Emperor it just works for some reason."

Wolves In The Throne Room – Diadem Of 12 Stars

"One of the albums that had a big influence on me getting into black metal. It’s been a pleasure getting to play some shows with them so many years later."

Dark Funeral – The Secrets Of The Black Arts

"This record and some of Dark Funeral’s other work has had a big influence on how I play guitar. There’s something about the way they combine rhythm section chords with tremolo picking leads that speaks to me."

Leviathan – The Tenth Sublevel Of Suicide

"One man black metal at its best. Leviathan never really makes the same album twice. He released a wide range of records that all have their own sound and approach."

"For some reason this record has always stayed with me after I first heard it. It’s a bit atypical compared to what I usually listen to or look for in a black metal record, but I’ve always liked Blut Aus Nord – especially the whole 777 series."

"Maybe my all-time favourite black metal record. The things that are happening on this record are ahead of their time and will remain so for a long time to come, I think. Mostly when people try to make something like this it turns out way too polished, and that’s what I like about Maranatha – it’s filth."

"Abbath is an interesting persona to say the least, but the man knows how to write a riff – as he gladly demonstrates on YouTube."