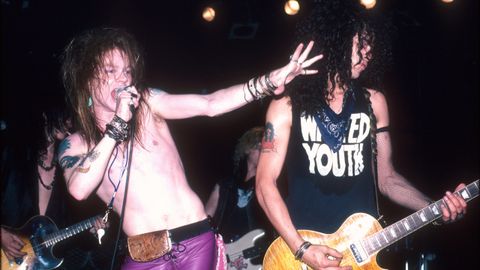 Believe me readers, I’d been looking forward to this gig for a long time, having already been mightily impressed with the lads’ Live ?I*@ Like A Suicide EP. I was sure that this show wuz gonna be a real smoker, but - shock-horror-it ended up being a bit of a, dare I say it, CHOKER!

So where did the band go wrong? Well, as they used to say on that old Colt 45 commercial, and I quote, ‘Never bolt a Colt’. And that’s exactly what happened here in The Marquee tonight - Guns N’ Roses blew it, pure and simple.

Some punters down the front obviously saw through the bullshit that was spewing forth and proceeded to spit and throw the odd can of beer at lead singer W. Axl Rose, who returned the compliment by saying, “Fuck you, pussy”.

He really did look well and truly pissed off, and this incident ended up putting a downer on the show as a whole.

On the plus side Guns N’ Roses do write good time rockin’ toons, it’s just a pity they all sound like Aerosmith outtakes mixed in with the odd hint of Rose Tattoo. Hell, I’m not complaining, I love both those bands, but did Guns N’ Roses really need to do a cover version of the Aerosmith classic Mama Kin? I think not.

The ‘best number of the night award’ went to the brilliant It’s So Easy, which just reeked of the Lightning Raiders (RIP), who were playing this sorta music back in the late 70s.

It has to be said that I left The Marquee in a very confused state, coz here was a band that has just made a truly wonderful album, the up and coming Appetite For Destruction, which I love, yet at the same time it’s sad they just couldn’t reproduce that rawness live. I blame it on those beer cans that were hurled at Axl!