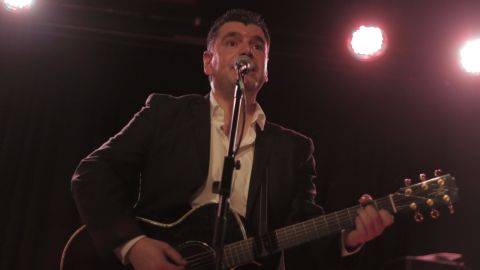 Prog was on hand as a packed crowd made up of competition winners and various prog luminaries such as Steven Wilson, Nick Beggs, Marillion’s Steve Hogarth, plus various members of Touchstone, Jem Godfrey from Frost*, Heather Findlay and Peter Cox from Go West (and more recently Manfred Mann’s Earth Band), many of whom appear as guests on the new album.

Accompanied by keyboard player Liam Holmes, Mitchell performed a short five song set, kicking off with Construct/Obstruct (which can be heard on the CD that comes with the current issue of Prog) before being joined by Heather Findlay for a moving Why Do We Stay, then Kim Seviour for an equally memorable Oubliette.

The bouncy Humans Being followed before an evocative The Red Balloons drew things to a close, with rapturous applause from the audience. Even though the set was acoustic , the strength and depth of Mitchell’s material shone through.

Mitchell will be busy touring with Arena later this year for their 20th Anniversary, but plans to bring the Lonely Robot, with accompanying guests to the live stage, are underway.

You can read full interviews with both Mitchell on Lonely Robot, and Arena about their latest album in the forthcoming issue of Prog, on sale March 11.