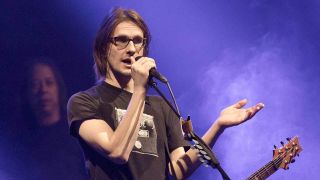 Trying to describe Steven Wilson’s musical output is harder than trying to explain trigonometry to drummers. You could tag him as “progressive”, but that conveys even less of what he has done and is about than describing Converge as a hardcore band does them justice. Wilson’s music, from Porcupine Tree through Storm Corrosion and to his solo career, is a mass of subtleties that a cursory dip of the auditory toe will miss entirely. He has written songs using acoustic guitars that superficially appears very sweet but contains more spite than an Anaal Nathrakh album (The Watchmaker, for example) or the kind of terror usually reserved for the likes of Deathspell Omega or Tyranny. But then, he’s not really a man interested in doing the expected.

“I’m not interested in making generic music. I never have been. I’ve never been attracted to generic music, particularly,” he explains. “People say to me, ‘what kind of music do you like?’ and I say, ‘Well, I like good music.’ As if I’m going to give them a shortlist of genres, like, ‘I like progressive rock, metal…’ and the answer is: I don’t. I don’t like all progressive rock; I think a lot of it is terrible. I don’t like all metal; I think a lot of it is terrible. I like things that I like. The things I tend to like tend to be the things that push the envelope a little bit. I like things that are slightly unexpected juxtapositions of sounds and moods and genres.”

Perhaps the most glaring example of this is the Storm Corrosion album he did with Opeth’s Mikael Åkerfeldt. Using strings and acoustic guitars initially seemed rather beautiful, but it quickly revealed itself as one of the most frightening records of the generation – very much the “unexpected juxtaposition” Wilson likes, and unexpected from two men with associations with heavy metal.

“We wanted to make something really sick and twisted,” Steven explains. “I think one of the great ironies is, of course, that metal music is traditionally a style of music that people would associate as being quite possible to make quite evil, quite aggressive music using that musical vocabulary. But we find ourselves in the 21st century, where that vocabulary is so over-familiar that it no longer has the power to do that to people. You cannot make anything that really sounds scary with metal any more, because it’s such an over familiar musical vocabulary. I’m not saying that metal should sound scary, but there have been times in history where it’s certainly been used as a vehicle for creating that kind of emotion, if you go back to black metal or even the first Black Sabbath record. But I don’t think it’s possible any more.”

While this may be debated by some – the likes of Ævangelist or Portal could be cited as recent counter examples – certainly it is true that metal has to try harder to scare in an era when metalheads grow up with Angel Of Death ubiquitous. The better scares now come in increasingly more esoteric areas of the style. Storm Corrosion, however, exemplifies why Wilson’s music is so effective: you don’t expect to feel the emotions you do listening to music that sounds like that.

Not that everyone who likes his music gets this. The overriding darkness filtering through so much of his work is, perhaps because of the less overtly bleak musical building blocks, sometimes missed by his own fans. During a brief interlude during his show at the Royal Festival Hall in 2013, Wilson described his irritation at a positive Amazon review that described his lyrics (many concerning serial killers) as “Tolkienian”.

“I’ve never written anything remotely connected with the world of fantasy, you’ll never see Roger Dean-style artwork. There are aspects of progressive rock that I have no empathy with, and that whole fantasy, hobbits, sci fi, Roger Dean [thing] is something I never liked as a kid, and still don’t. And it’s remarkable how someone could hear that in the music when it simply is not there,” Steven says. “That is, of course, going to be a source of irritation, because I’m trying to write these songs that are very much about the world we live in, very much about inner space not outer space, that are about real, tangible human emotions and not about the emotions of some hobbit living on another planet. And yet somebody apparently completely missed that.”

Those emotions are frequently dark ones, with a read of the lyrics confirming that, yes, you were right to think that bright and pretty soaring violin line was illustrating someone who never got over a childhood bereavement (The Raven That Refused To Sing), or that jazzy saxophone solo did indeed relate to a man who tortured ten people to death, including an entire family (Raider II).

“I think real darkness is always founded and based in our deepest psychological fears, and that tends to all come back, in a way, to mortality and death,” Steven explains. “The fact that human beings are aware, from a very early age, that one day we will cease to exist and that we will die. And it’s responsible for so many psychological problems. It’s the reason we created the myth of religion – and I do believe religion is a myth, and I believe the reason mankind created the myth of God and religion is because we’re terrified of the idea of death, so we create these myths to try and make ourselves feel better about death. And in my own way, I’ve created my own explanation – or my own kind of emotional crutch, if you like – which is my music. I pour my own fears about death and mortality and my fears about dying along or my fears about dying having not contributed anything or made the most of my life. I think those things really tap very deeply into the people that get it.”

The counter-intuitive combinations of sound and emotion Wilson produces perhaps inevitably mean that not everyone will get it. Some will simply not like it, some will like the darkness but not feel it enough through the music to resolve the counterpoint, some will miss the darkness entirely and hear dragons and wizards. And while it’s understandable that misinterpretation annoys him, you sense at the point of creation, he had no interest in pleasing anyone but himself. How else could he come up with such unexpected combinations of sound and feel?