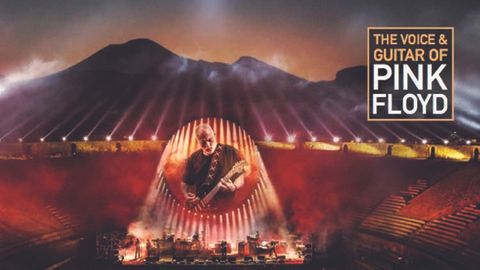 Last summer, 45 years on from Pink Floyd’s performances there for Adrian Maben’s legendary film, David Gilmour played two nights at Pompeii’s amphitheatre, in the shadow of Mount Vesuvius. He was the first human to play in front of a live audience there since the gladiators back in AD 79, the year Vesuvius erupted and the venue was entombed in ash. Thankfully, the volcano behaves itself this time and Gilmour and his rapt crowd aren’t required to follow Spartacus and Commodus to the great gig in the sky during the intermission.

Nevertheless, there’s a tangible atmosphere and a nod to the passing of time. “Ghosts from the recent and distant past are with us here,” says Gilmour after The Great Gig In The Sky itself has been given a sublime rendition, led by his steel guitar and gospel-schooled backing singers. “That was a song written by Richard Wright, many years ago. And here’s a song written about him…”

A Boat Lies Waiting follows, from Rattle That Lock, the album that was then being promoted. Songs from the man’s solo career dominate earlier parts of the show, but there’s a tasteful trade-off between his fresher work and the Floyd landmarks that most are here to witness.

As twilight moves into darkness, the effects, shining on, become more spectacular. If you’ve ever been to a Floyd/Gilmour show, you’ll have high hopes, and they won’t be dashed. If you haven’t, empty your head for a proper sensory onslaught. Not that it’s aggressive. Rather, the bells and whistles by Marc Brickman grow in dazzling stature gradually and gracefully, much like the music, building over two and a half hours to a cathartic climax.

All the knowing Floyd-related symbols, signals, orbs and giant mirrors appear, and – spoiler alert – you might want to prepare yourself for some revolving suns and moons and a phenomenal pulsating grid of green and red lasers. When we get to the euphoric home stretch of Run Like Hell, Time, Breathe and Comfortably Numb, the visual wizardry makes Luc Besson look like Gerry Anderson. For all that, it’s the music that makes your heart gently weep. (The package is available in various CD, vinyl, DVD and Blu-ray permutations.)

From the first moments, Gilmour’s guitar tone emits its unique emotional pull, and with his band flawless, he glides through the gears until every gorgeous note seems like manna from heaven. From the drive of Money to the throb of One Of These Days, it sounds molten. There’s mythology and magic present.