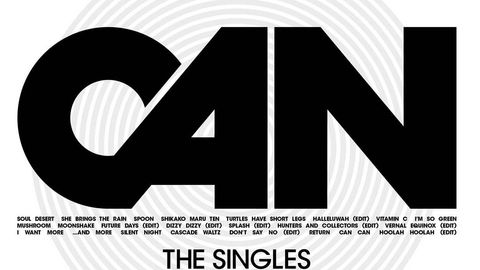 Can were so far ahead of the curve that it often feels like we’re still catching up with them. Their contemporaries in the Anglo-American rock and progressive scenes may have incorporated jazz and classical into their music, but Can drew on an even broader range of influences, as this compilation of the band’s A and B-sides – collected together for the first time – amply demonstrates. The irony of Can being held up as one of the key proponents of Krautrock is also apparent, because much of the music here is as far from the riff-driven, 4⁄4 model of ‘rock’ as you can get.

Instead, it’s informed by the likes of the Velvet Underground, James Brown, Fela Kuti and Karlheinz Stockhausen, avant-pop meets militant funk, with songs emerging from both improvisation and studio-based alchemy. Soul Desert, Can’s first single, has an insistent head-nodding groove, but it’s as though every last vestige of the blues is being squeezed out of it. Key elements of their sound are already in place – the hypnotic repetition, the stripped back instrumentation, the feverish vocals. But it’s Jaki Liebezeit’s polyrhythmic drum breaks that would come to define Can, from the joyous clatter of Turtles Have Short Legs to the darkly propulsive Vitamin C.

What’s striking is the way that a dream logic seems to guide these songs’ arrangements, with order created from often chaotic elements. Quite unexpectedly, they even scored a modest UK hit in 1976 with the Kraftwerk-meets-Eno disco of I Want More. Yet at the time, it condemned them to the status of European novelty act, which follow-up singles such as their charming if slight version of Silent Night and an ill-advised interpretation of the Can-Can did little to dispel.

These days of course, Can are fêted by both critics and hipsters alike, with every other psychedelic or experimental band proclaiming them as an influence. But the manic, magical inventiveness of these German pioneers is a quality that’s nigh-on impossible to imitate.