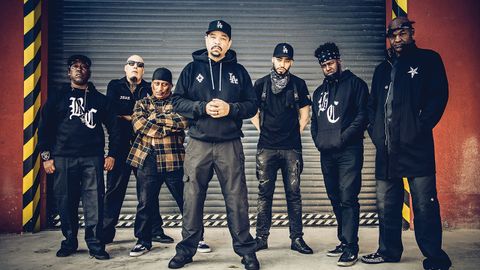 Hip hop legend, small screen titan and arguably the coolest motherfucker on the planet, Ice-T really doesn’t need to keep making records with Body Count for financial reasons or to plump up his own ego.

Listening to Carnivore, however, you may sense that Ice-T needs to keep making Body Count records because, if he didn’t, he may well kill somebody.

Since their transformation into a genuinely brutal and destructive hardcore metal crew on Manslaughter in 2014, Body Count have grown both in stature and significance; he may be a multi-millionaire, but few people sound as righteously pissed off about the state of things as Ice does here.

Where Manslaughter had Talk Shit, Get Shot and 2017’s Bloodlust had the nail-on-head brilliance of No Lives Matter, Carnivore has its ferocious opening title track: a snarling, unrepentant cry of animalistic rage set to some of the chunkiest riffs this side of Hatebreed.

Elsewhere, Carnivore doesn’t quite match its two immediate predecessors’ strike rate. A new version of Ice’s gangsta rap classic Colors hits the mark, as do rowdy collaborations with Jamey Jasta (Another Level) and Power Trip’s Riley Gale (Point The Finger), and No Remorse ranks as one of the most hilariously unpleasant rants of the revered rapper’s career.

But literally no one wanted a cameo from Evanescence’s Amy Lee and while When I’m Gone strikes a reasonable balance between mawkishness and menace, her contribution feels glued on.

If you enjoyed Body Count’s cover of Raining Blood, then their note-for-note hammer through Ace Of Spades does exactly the same thing by plonking Ice-T into the middle of a metal classic and letting him have an absolutely brilliant time.

His genuine enthusiasm for this stuff – for Motörhead, for metal, for Body Count – is infectious enough on its own, without Ernie C’s increasingly authoritative riffs to back him up. It’s no classic, but Carnivore will still take chunks out of you.

Body Count's Carnivore is out now via Century Media.