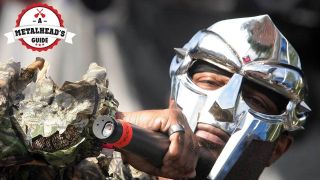 Hip hop and metal, despite obvious differences, have loads in common. Both were born of social disenfranchisement, and consequently share a starkly empowering, against the grain ethos, with a penchant for aggrandising fantasy. Both hit hard, placing emphasis on rhythm and groove, hip hop trading metal’s compositional complexity for verbose lyricism that prevails as today’s most popular form of poetry. Admittedly past meetings of the two genres have produced… variable results, but just as the intellect and creativity within metal’s underground are frequently overlooked due to its mainstream, so too is the true heart of hip hop, its core values and pride for a musical heritage taking in jazz, funk, soul, and the blues alive and well within a vibrant underground.

Here then is a by no means comprehensive list of contemporary artists who have all contributed something unique, all of them gateways to the joys of a diverse underworld.

Tyler, the Creator
Metal and hip hop have long found common ground in skate culture; most recently in Tyler’s multi-hued fantasy world, ever the weird kid, bullied at school for wearing a Slipknot shirt. Whether sporting an inverted crucifix on his forehead on sophomore album Goblin or cathartically indulging in violent lyrical fantasies that got him banned from the UK, Tyler’s mischievous muse continues to mature, motivated at its core by a love for music in all forms and a defiant free will.

Madlib
The king of beats, this musical encyclopaedia is dedicated to a life of digging through vinyl crates in search of the perfect sample. Anyone who sees no artistic merit in such expression needs to pay attention to the way he effortlessly repurposes musical history within his soulful cuts, a recluse working from his ‘bomb shelter’ within Stones Throw records, a hotbed of musical eccentricity. His prolific back catalogue covers most genres, recently releasing Rock Konducta, inspired by rock and metal.

MF Doom
Dropped by his label and left homeless after the death of his brother, Daniel Dumile harnessed his love of pop culture to reinvent himself as villainous alter ego DOOM. From behind a mask the metal-faced outlaw proceeded to exact his revenge with an obscure lyrical flow and unparalleled chain links of metaphoric profundity that redefined rap’s potential. DOOM is the rapper’s rapper. He and co-conspirator Madlib collaborated on 2004’s Madvillainy, one of the greatest hip hop records of all time.

Aesop Rock
If there’s anyone who can match DOOM, its Aesop Rock, a thick-accented New Yorker with the biggest vocabulary in the game. His tongue twistingly complex lyrical exhortations and left of field poetics led to his nickname Aesop, like the dark fables. After the dissolution of respected underground label Definitive Jux in 2010, one of several tragedies he had recently experienced, Aesop holed himself up and single-handedly wrote and recorded the masterful Skelethon, an album about death in its many forms.

Run The Jewels
A collaboration between two legendary underground MC’s, Killer Mike and El-P, each with years of experience in the game, Run The Jewels started life as a one-off project, quickly gaining a huge fan base. The current darlings of the underground hip hop scene, they achieved breakout success with second album RTJ2. An explosive combination of two uniquely incendiary lyrical flows and infectious, irresistibly huge beats, they caught metal’s attention by working with Rage Against The Machine’s Zack De La Rocha.