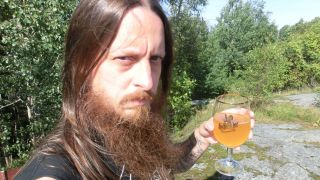 When not making music with Darkthrone, Fenriz hosts his own internet radio show and makes extensive Spotify playlists. We asked him to select his essential Darkthrone playlist. He declined.

Instead, he chose his favourite tracks from 2015 – a particularly good year for undergound promos, by all accounts – and shines the spotlight on some of the unsung heroes of metal. What a gent…

“I don’t like to write about metal much; my strength is listening and choosing. This Trial album was one of last year’s best releases and most listened to albums. It has most of what I look for in a heavy metal track.”

“This has wonderful musicianship and great vocals. This wasn’t released on many vinyl copies, so it is kind of a cult album for some of us. If this style of metal becomes too streamlined and professional, to my ears, it loses a lot of its soul. Still, I think it’s as professional as hell.”

“The only thing I struggle with on this premium doom/metal album are the sound of the bass drums. I actually liked this so much I ended up as a penpal with their guitarist Steve Jansson.”

“I’ve been dragging this vinyl around for a lot of the photos for Radio Fenriz, just because it’s a damn good outing. I mean, the whole soundscape is ravishing, damn it! It’s often reminiscent of Deep Purple.”

“Nachash have been one of the hottest Norwegian bands for the last couple of years. There is something transcendental about their perfect underground 80s sound.”

“Everyone who’s in the know reckons that this was probably the best and rawest death metal album from last year.”

“One of the biggest scandals is that this release is the only one out of 47 from 2015 that I need – but it’s not on vinyl. I have 45. I’m still missing the Imperial State Electric album, but I can buy that easily. Can someone release this Demon Lung album on vinyl soon please?”

“This is easily one of my favourite heavy metal tracks from 2015. I had this promo for at least half a year before it came out, because Steffen from High Roller records was so eager for me to hear it. The vocals remind me a little of Jonah Quizz, who also sang on the first Candlemass album.”

“This song is such a spectacle. I love hearing it every single time. They have a breathtaking understanding of metal.”

“The final track I’ve chosen is my favourite track from 2015. It’s the title track from their album Shadowline. It gives me goosebumps every time.”

Darkthrone’s new album Old Star is out now through Peaceville.